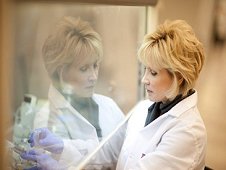 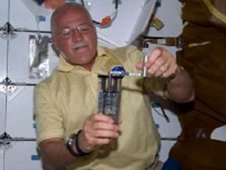 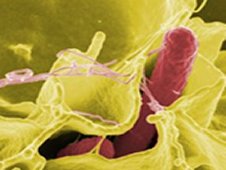 An example of Salmonella invading cultured human cells. (Rocky Mountain Laboratories, NIAID, NIH)
View large image Have you ever been afflicted with a case of food poisoning so awful it made you stop to wonder why no one's found a cure or sure-fire preventative for it yet? And chances are you or someone you know has experienced a bacterial staph infection so aggressive it was resistant to nearly every antibiotic used by the medical profession. The development of vaccines to different pathogens has impacted our global health in ways we could have never anticipated as recently as the early 20th century, and there are still plenty of pathogens to protect ourselves from. The evolution of vaccine development is being streamlined with the help of the microgravity environment exhibited on the International Space Station.

Researchers Timothy Hammond, Ph.D., at the Durham Veterans Affairs Medical Center and Cheryl Nickerson, Ph.D., at Arizona State University have both flown experiments, using microgravity in their search for therapeutic agents or vaccines against Salmonella bacteria. Salmonella infection is one of the most common forms of food poisoning in the U.S. Worldwide, Salmonella diarrhea remains one of the top three causes of infant mortality, so a vaccine has the potential to make dramatic improvements in health for developing countries. The space environment has been shown to induce key changes in microbial cells that are directly relevant to infectious disease, including alterations of microbial growth rates, antibiotic resistance, microbial invasion of host tissue, organism virulence (the relative ability of a microbe to cause disease) and genetic changes within the microbe. Collectively, this body of work has shown that the virulence of this organism increases in microgravity. The targets identified from each of these microgravity-induced alterations represent an opportunity to develop new and improved therapeutics, including vaccines, as well as biological and pharmaceutical agents aimed specifically at eradicating the pathogen.

Follow-on experiments conducted on space shuttle flights to the space station have examined the virulence of methicillin-resistant Staphylococcus aureus, known as MRSA, as well as other microbes. MRSA is a type of Staphylococcus bacteria that is resistant to certain beta-lactam antibiotics; these antibiotics include methicillin, penicillin, and amoxicillin. More severe or potentially life-threatening MRSA infections occur most frequently among patients in healthcare settings. MRSA is especially troublesome in hospitals, where patients with open wounds, invasive devices and weakened immune systems are at greater risk of infection than the general public.

The studies of Salmonella and MRSA bacteria in space are part of the U.S. National Laboratory pathfinder program to demonstrate the use of the space station as a research platform for commercial research and development. The pathfinder research approach uses a set of flight experiments to identify the components of the organisms that facilitate increased virulence in space, and then applies that information to pinpoint targets for anti-microbial therapeutics, including vaccines. Discovering the factors responsible for growth and virulence of bacteria will contribute to the development of novel therapeutic treatments, including vaccines. In fact, the commercial corporation Astrogenetix's space-based Salmonella research has resulted in the discovery of a potential candidate vaccine for this pathogen and is currently in the planning stages for review and commercial development. More recently, two Arizona State University teams led by Nickerson and Roy Curtiss III, Ph.D., worked together to deliver vaccine samples that were flown to the space station on STS-135. The investigation seeks to improve on existing vaccines against Streptococcus pneumonia -- a bacteria that causes life-threatening diseases, such as pneumonia, meningitis, and bacteremia. This organism is responsible for more than 10 million deaths annually and is particularly dangerous for newborns and the elderly, as they are less responsive to current anti-pneumococcal vaccines traditionally delivered by needle. An orally delivered vaccine known as the Recombinant Attenuated Salmonella Vaccine, or RASV, is currently undergoing clinical trials, and the Arizona State University research teams are seeking to increase this vaccine’s anti-pneumococcal effectiveness by maximizing its ability to induce a protective immune response. "We have the opportunity," commented Nickerson, "to utilize spaceflight as a unique research and development platform for novel applications with potential to help fight a globally devastating disease." The samples sent to the space station were a genetically altered strain of Salmonella that carries a protective antigen against the Streptococcus pneumonia bacteria. Molecular targets identified from this work hold promise for translation to develop new and improve existing anti-pneumococcal RASVs to prevent disease for the general public. Moreover, because RASVs can be produced against a wide variety of human pathogens, the outcome of this study could influence the development of vaccines against many other diseases in addition to pneumonia.

This space-based research provides evidence that the International Space Station as a National Laboratory is a valuable resource that can be utilized for the benefit of Earth. Discovery of therapeutic targets for MRSA and Salmonella infections are examples of efforts to use the novel microgravity environment to develop new pharmaceutical agents, and as the station nears completion, there will be an increase in such opportunities to utilize the International Space Station National Laboratory as a platform for drug discovery. Overall, these results represent just a fraction of the possibilities of future microgravity discoveries. Scientists participating in these studies plan to fly a continuing series of experiments to the space station, giving them streamlined access that will help to accelerate progress for several different lifesaving vaccines.