Advanced Ultrasound for the Space Program and on Earth1 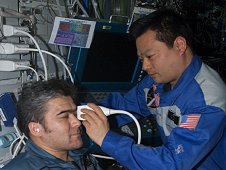 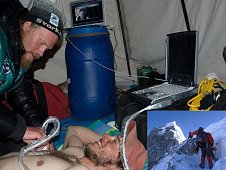 The educational program and remote expert guidance concepts developed for Advanced Diagnostic Ultrasound in Microgravity (ADUM) on the ISS was modified for terrestrial use. There are a great number of medically under-served regions on the Earth. For example, high altitude climbers are at risk of serious lung problems, due to the thin air at heights. (Scott A. Dulchavsky, M.D., Ph.D.) View large image A patient's location at the time of a medical crisis often determines their pain and suffering and even their chances of survival. As a rule, ease of access to medical care decreases as the distance from a developed metropolitan area increases. Providing medical care for people in remote communities; at research outposts, such as Antarctic stations; and on isolated crews, such as the International Space Station crew, is particularly challenging. Medical care at these remote locations is usually performed by minimally trained medical personnel, and a physician is sometimes available only through phone or Internet links, if at all. The ability to quickly diagnose an illness or injury and initiate treatment improves the outcome for the patient and reduces the consequences for the rest of the mission. The ability to make an accurate diagnosis in remote areas reduces the impact of the incident and the chances of an expensive and potentially dangerous and unnecessary evacuation.

Ultrasound imaging is among the fastest, safest and most universal diagnostic methods ever invented. It provides much of the information that can be obtained by expensive technologies, such as X-ray, computed tomography, or magnetic resonance imagery, and it is the only method to produce a real-time or live image that can be interpreted and/or transmitted at the same time. In the right hands, ultrasound instantly answers many clinical questions, shortening the assessment time and improving outcome.

The NASA Advanced Diagnostic Ultrasound in Microgravity, or ADUM, research team, based at NASA's Johnson Space Center, tests novel uses of ultrasound in large medical centers and laboratory conditions, and then adapts them for use in space flight, providing training and guidance to non-medical operators. The ADUM team is comprised of individuals with unique clinical, scientific, engineering, and teaching expertise, as well as direct experience in a multitude of telemedicine projects and programs.

Earth-Based Testing: Expanded Uses for Ultrasound
Ultrasound is routinely used to obtain diagnostic information about pregnancy and various abdominal and vascular conditions such as gallbladder disease or blood clots. We have examined the use of ultrasound in additional conditions, including collapsed lung, broken bones, injuries to the eyes or head and infections in the teeth or sinus cavities.

Patients who have had chest injuries are at risk of a collapsed lung or pneumothorax, which is usually diagnosed with a chest X-ray. The ADUM team developed a simple lung ultrasound technique that can be used to diagnose a pneumothorax with higher accuracy than a chest X-ray. This new technique is now standard in many hospitals and trauma centers around the world. Using parabolic flight as an analog to microgravity, the ultrasound hardware, astronaut training and remote guidance procedures were validated for use on the space station as a potential capability for the medical support of future space missions.

The ADUM team developed "cue cards" to rapidly guide nonexpert users to perform ultrasound examinations on patients with extremity injuries and found that broken bones can be diagnosed with more than 90-percent accuracy after just minutes of training. Ultrasound also can be used to determine if muscles, joints or tendons are injured. Importantly, it provides a convenient way to look at muscles and joints as they move, which is an advantage over X-ray or other techniques that only provide still images of the body.

There is concern that astronauts will suffer eye injuries caused by objects floating in the spacecraft and, more recently, the effect of prolonged exposure to microgravity on vision. Ultrasound can be used to determine if there are foreign particles in the eye and to identify other conditions that could affect eyesight during space travel. Ocular ultrasound also can provide important information about the condition of the brain in head-injured patients. Those with brain swelling can be identified by using ultrasound to measure the size of the nerve in the back of the eye.

Rapid Training for Nonexpert Operators
During an ultrasound examination, a probe is placed on the patient's body to transmit and receive sound waves to produce a moving image. The technique depends on proper placement and movement of the probe to obtain the best images, and it generally requires hundreds of hours of practice. The ADUM investigators found that it is possible to use non-medical operators to obtain good-quality data if the right clinical questions are asked and the operator is given the right amount and type of information and direction from a remotely located expert.

The ADUM team developed a bilingual (English and Russian) computer-based On-Board Proficiency Enhancement, or OPE, e-learning tool, which consists of a stepwise program for performing targeted ultrasound examinations after only a short hands-on training program before flight. The OPE program includes modules that review equipment set up, basic and advanced ultrasound principles, anatomy, remote guidance principles and exam-specific suggestions with a reference collection of target images. Companion cue cards, which show where to apply the probe to obtain the correct image, were developed for all of the ultrasound examination sets. This training regimen can be completed in two or three hours and includes 30-minute refresher modules to be completed just before an examination.

The key concept developed by the ADUM team is the methodology for "Remote Expert Guidance" of ultrasound examinations, which links a remote expert with the on-site operator in a virtual common working environment. The ultrasound machine video output is transmitted to the remote expert via a satellite or Internet connection, and the operator is guided to obtain the ultrasound images via voice commands. This technique has dramatically reduced training requirements (often down to minutes) while preserving the quality of the ultrasound examinations.

Ultrasound on the Space Station
Initial trials of the new paradigm, using ultrasound to capture images of the heart and abdomen, led the way to a large series of ADUM experiments on the station, sponsored by NASA and the National Space Biomedical Research Institute, or NSBRI. The ADUM investigators stressed the importance of minimal preflight training of astronaut and cosmonaut crew members, computer-based refresher e-learning before imaging sessions, and complex ultrasound examinations on the station with remote expert guidance.

More than 100 hours of ultrasound examinations were conducted with long-duration station crew members, providing a "head-to-toe" assessment of changes in the body associated with space flight. As of the end of 2009, the techniques and solutions developed by the team were officially accepted for medical support of the station crews as well as for conducting experiments in space physiology and clinical space medicine research.

Initial experiences with the hockey and baseball teams showed that the athletic trainers could perform complex muscle, bone and joint ultrasound examinations rapidly and with high diagnostic accuracy, allowing point-of-care diagnosis of athletic injury. Some ADUM investigators have extended these capabilities to the United States Olympic Training Facilities and have supported the Torino, Beijing and Vancouver games with hundreds of point-of-care ultrasound examinations in athletes with suspected injuries.

The ADUM team has extended the concept to remote environments, such as Mt. Everest and the Arctic Circle. The team designed a self-contained system that includes a portable ultrasound device, solar power, satellite phone connectivity and a laptop computer containing educational programs. An untrained mountaineer was able to perform a complete lung ultrasound scan at Advanced Base Camp on Mt. Everest using cue cards and remote guidance. The novice operator was able to send high-quality ultrasound images to the remote expert to diagnose a fellow climber with fluid in the lungs secondary to high altitude. A similar remote ultrasound system was used at Resolute Bay in the Canadian Arctic Circle to enable nonexpert operators to perform targeted scans of almost every organ system.

The just-in-time ultrasound educational programs developed for use in space and for remote locations also are appropriate for training health care personnel. A training program was developed for Wayne State University School of Medicine, and is now used by the American College of Surgeons to teach ultrasound to the surgeons of the future.

Future Plans
The ADUM team is currently developing a simple, whole-body ultrasound education catalog that can be used to teach nonexpert operators to diagnose a wide variety of conditions. An integrated remote medical care device is being created to combine computer education, ultrasound-based diagnostics and communication capabilities with remote experts to extend high-quality medical care capabilities to remote, rural and underserved regions on Earth.

The real-time nature of ultrasound imaging and the ability to easily transmit the images to allow remote expert guidance make ultrasound applications especially attractive for remote use. ADUM investigators are studying the possibility of using ultrasound to effectively answer primary clinical diagnostic questions in unconventional settings where ultrasound is the only (or the first available) source of imaging and where on-site expertise is limited. They have developed and extensively used multimedia e-learning software, which makes a winning combination with real-time mentoring of the distant on-site operator (remote expert guidance). These methods of focused ultrasound have been used successfully on the station and in several applications on the ground.

Ultrasound is one of the most adaptable diagnostic imaging modalities, which can be used for many medical and surgical conditions. Advances in portability and affordability, coupled with enhanced training programs and tele-ultrasound, can provide powerful diagnostic capabilities anywhere on and off the planet.

Together with its partners, the ADUM team will work to create new knowledge and capabilities to benefit human health on Earth and in the most daring exploration settings of the future.