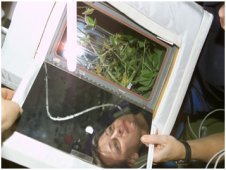 ISS Science Officer, Peggy Whitson with the ADVASC soybean plant growth experiment during Expedition 5. (NASA Image ISS005E08001) What was done on ISS: Understanding the effects of gravity on plant life is essential in preparation for future interplanetary exploration. The ability to produce high energy, low mass food sources during space flight will enable the maintenance of crew health during long duration missions while having a reduced impact on resources necessary for long distance travel.

The Advanced AstrocultureTM (ADVASC) investigation, led by Dr. Weijia Zhou of the Wisconsin Center for Space Automation and Robotics, University of Wisconsin-Madison, explored the benefits of using microgravity to create custom crops that can withstand the inhospitable climates of space flight, resist pestilence, and need less volume to grow. ADVASC was performed in three phases over several ISS expeditions. The first phase of the investigation occurred on ISS Expedition 2 and involved growing Arabidopsis thaliana (rapidly growing, flowering plant in the mustard family that has been grown on many space missions) from seed to seed in space. The second phase of the investigation used new Arabidopsis thaliana seed, as well as seeds harvested from the first phase to create a second generation of Arabidopsis thaliana plants. The third and final phase of the investigation grew soybean plants, from seed to seed, all using the ADVASC payload, an autonomously operated plant growth unit. 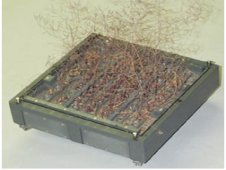 Dried Arabidopsis thaliana plants, from ISS Expedition 4, upon their return to Earth. (Image courtesy of Weijia Zhou) Soybeans are a widely used food crop on Earth and a potential food crop for future long duration space missions. The ADVASC investigators looked for genetic and structural differences, such as improved phytochemical production, between Earth grown and space grown soybeans that could be exploited to create better products.

Significance: The potential benefits of using microgravity to create crops to withstand disease and grow in limited volume can be realized in both space flight and here on Earth. Furthermore, ADVASC is a precursor for growing plants during extended space expeditions to the Moon and Mars, for both food and as components of regenerative life support systems.

ADVASC has also contributed to National Security, cancer-fighting pharmaceuticals and educational tools for students. ADVASC’s novel air scrubber was designed to remove ethylene from the chamber atmosphere, thus allowing longevity of the produce. The success of this technology on ISS led to the development of an air purifier that is beneficial on Earth by killing 98% of airborne pathogens that pass through it, including Bacillus anthraci (anthrax), dust mites, molds, and harmful viruses and bacteria such as Influenza A (flu), Escherichia coli, Staphylococcus aureas, Streptococcus pyogenes, and Mycoplasma pneumonia. This technology is now in widespread use for food preservation, in doctors’ offices, and for everyday living environments including homes, hotels and offices. In addition, the light, used to simulate photosynthesis in the growth chambers, can heal wounds and increases the effectiveness of cancer-fighting drugs in vitro.

For more information related to the technology development for this experiment, please visit: