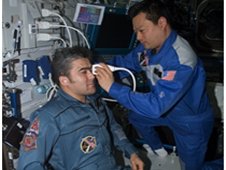 ISS Commander and Science Officer Leroy Chiao performs an ADUM scan on the eye of Flight Engineer Salizhan Sharipov during Expedition 10. (NASA Image: ISS010E18770) What was done on ISS: Since there is not room for a fully functioning hospital and staff of doctors aboard the ISS, nor is it feasible for a crewmember to return to Earth for a quick medical checkup, other methods must be used for diagnosing internal injuries and illness.

The Advanced Diagnostic Ultrasound in Microgravity (ADUM), led by Dr. Scott Dulchavsky of the Henry Ford Hospital in Detroit, tests the accuracy of ultrasound in expanded clinical conditions which may be seen during space flight. These investigations include assessing health problems in most organ systems including the eyes, sinus, lungs, heart, abdomen and bones. The ADUM experiments also tests the ability of routine, in-flight ultrasound to monitor bone density during long-duration space flights. Another objective of the experiment is to determine how well non-medical crewmembers can perform complex ultrasound examinations with minimal computer based training remote guidance from Earth. The intent of the ADUM investigation is to develop methods to allow a minimally trained operator to use an ultrasound machine to evaluate a vast array of medical problems.

ISS crews used the ISS Human Research Facility ultrasound device to conduct over 80 hours of diagnostic examinations including: the cardio/thoracic scan, which focuses on the heart and the lungs; the abdominal / retroperitoneal scan, which focuses on the organs of the abdomen, including the liver, spleen, kidneys, and bladder; the dental/sinus scan, which can image the mouth, teeth, gums, facial bones and sinuses, and eyes; and the bone scan, which images bones and characterizes bone/muscle loss during flight. A key component of ADUM on station is the on-board proficiency enhancer, a software application that is used to train crewmembers on the methods employed for each scan. 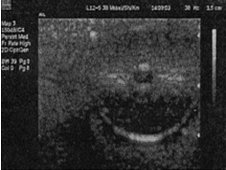 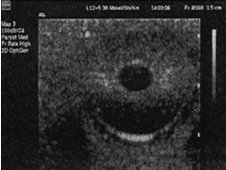 Ultrasound image of the pupil on orbit. [1] The ISS crews, which began their work with ADUM on Expedition 8 and completed it during Expedition 11, have demonstrated that minimal training, along with audio guidance from a remote expert, can obtain diagnostic quality ultrasound imagery. The ISS crewmembers, acting as operators and subjects, have completed comprehensive scans of the cardiothoracic and abdominal organs as well as limited scans of the dental, sinus, and eye structures. They also have completed multiple musculoskeletal exams, including a detailed exam of the shoulder muscles. Analysis of ultrasound video and images downlinked to ground teams at the NASA Johnson Space Center TeleScience Center has yielded excellent results that have resulted in numerous publications including the first electronic publication submissions from the ISS.

Significance: The ADUM experiments demonstrated that ultrasound is an accurate diagnostic technique for numerous clinical conditions which may occur in space, and importantly, back on the Earth. The experiments developed techniques which allow a non-expert user to rapidly train and acquire ultrasound images in many areas of the body which can be used to guide care: establishing ultrasound as a key tool for clinical medicine on future vehicles, the moon, and eventually Mars. There is not room for full medical capabilities aboard the ISS, nor is it feasible for a crewmember to return to Earth for diagnostic studies. This experiment demonstrated that crew performed ultrasound can lead to efficient diagnosing of medical problems with minimal use of on-board resource to in timely treatment as well as avert unnecessary evacuation. Crew members on exploration class spaceflight to the Moon or Mars could be evaluated by doctors on Earth using a modification of this technology. This type of capability is essential for long-term space exploration.

The success of ADUM has led to additional applications of ultrasound on Earth. The training methods developed by ADUM have been incorporated by the American College of Surgeons Committee on Education into a computer based program to teach ultrasound to surgeons and have been used by the United States Olympic Committee to provide care during the Olympic Games. The remote expert guidance paradigm has been adapted on Earth for remote on Mt. Everest and the High Arctic and can be used for patients in rural/remote areas, disaster relief, and the military. Using existing communication systems, a person (e.g., nurse, physician's assistant, military medic) who is minimally trained in ultrasound can perform an ultrasound exam on a patient with guidance from an expert at a medical facility hundreds or thousands of miles away. This would expand the tools for the rural medical community, provide the ability to triage a mass casualty, and help in the decisions to conduct medical transport of patients.

For more information related to the technology development for this experiment, please visit: