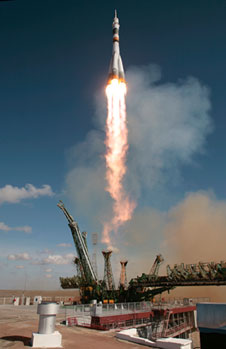 The Soyuz TMA-13 spacecraft launches from the Baikonur Cosmodrome in Kazakhstan on Oct. 12, 2008 carrying a new crew to the International Space Station. Image Credit: NASA/Bill Ingalls .

Russian Federal Space Agency (Roscosmos), facilitated by the space agencies of the other states, as well as by social organizations and mass media, invites children in Russia and other countries to participate in the International contest of children's drawings “Let`s Design a Logo for Soyuz TMA-14 Crew.”

Soyuz TMA-14 with Russian cosmonaut, US astronaut and space flight participant aboard is planned for launch in March, 2009.

Soyuz TMA-14 prime and backup crews, Russian cosmonauts and US astronauts expressed their readiness to take active part in selecting the best children`s drawings, together with the experts from Roscosmos, other space agencies, and public. One of these drawings will become Soyuz TMA-14 crew`s emblem. Approved by Roscosmos Administrator, the emblem gets the status of the official crew logo. The logo-patch is put on the suits of three crew members: a cosmonaut, an astronaut and a spaceflight participant.

The winners (places 1, 2 and 3) will have the opportunity to visit Baikonur space port to participate in the seeing-off ceremony of the Soyuz TMA-14 crew in March next year.

The designs (paintings, graphic arts, computer arts) marked “Logo Contest” (in the e-mail subject or on the envelope) shall be mailed to:

Target age group of the International Children`s Contest is from 6 to 15. The authors shall provide some personal data, such as detailed mail address and telephone number, together with their patch design drawings. Information about the age of the participant is mandatory. Authorship credibility is under the responsibility of the person submitted the drawing. Roscosmos Press Office
› Back To Top