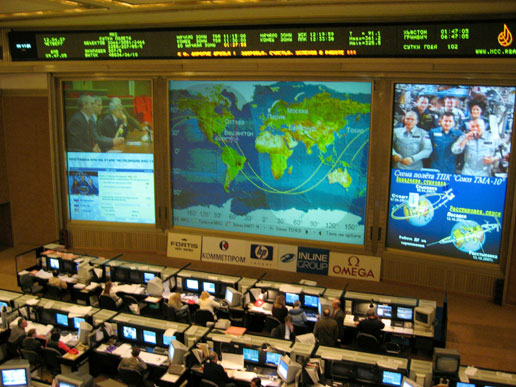 JSC2007-E-18512 (12 April 2007) --- An overall view looking forward from the rear of the Russian Mission Control Center in Korolev, outside Moscow on April 12, 2007 as Russian space officials called up to the Expedition 14 and 15 crews and U.S. spaceflight participant Charles Simonyi aboard the International Space Station. The officials offered congratulations on the Cosmonautics Day in celebration of the 46th anniversary of the launching of Yuri Gagarin as the first human in space. The ground team also offered congratulations to Expedition 14 commander Michael A. Lopez-Alegria and Expedition 15 flight engineer Sunita L. Williams on the 26th anniversary of the launching of Columbia on the first Space Shuttle mission.