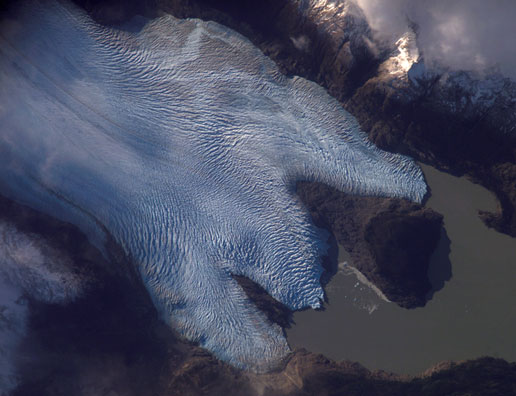 ISS015-E-10699 (4 June 2007) --- Grey Glacier is featured in this image photographed by an Expedition 15 crewmember on the International Space Station. The Southern Patagonian ice field of Chile and Argentina hosts several spectacular glaciers -- including Grey Glacier located in the Torres del Paine National Park in Chile. This glacier, which has a measured total area of 270 square kilometers and length of 28 kilometers (1996 measurements), begins in the Patagonian Andes Mountains to the west and terminates in three distinct lobes into Grey Lake. This view captures a striking blue coloration of the glacier -- this is due to absorption of visible red wavelengths, and scattering of light in the blue wavelengths as it is transmitted through the ice. Certain portions of the glacier visible in the image are indeed grey. Linear grey-brown moraines are accumulations of soil and rock debris that form along the edges of a glacier as it flows downhill across the landscape (much like a bulldozer blade). Glaciers flowing down-slope through adjacent feeder valleys ultimately meet, and debris entrained along their sides becomes concentrated in the central portion of the resulting single large glacier -- much as smaller streams of water join to form a single large river. Three of these medial moraines are visible in the ice mass at center left. Grey-brown patches of debris from adjacent mountainsides color the surface of the easternmost lobe of the glacier (top). Several crevasse fields are visible in the image. The crevasses -- each a small canyon in the ice - form as a result of stress between the slower- and faster-moving ice within the glacier. The crevasse patterns of Grey Glacier are complex, perhaps due to the three-lobed nature of its terminus, or end, into Grey Lake. The rugged surface of the glacier is also demonstrated by the jagged shadows cast onto the surface of the lake. Image Credit: NASA.

+ View high-resolution image
› Back To Top