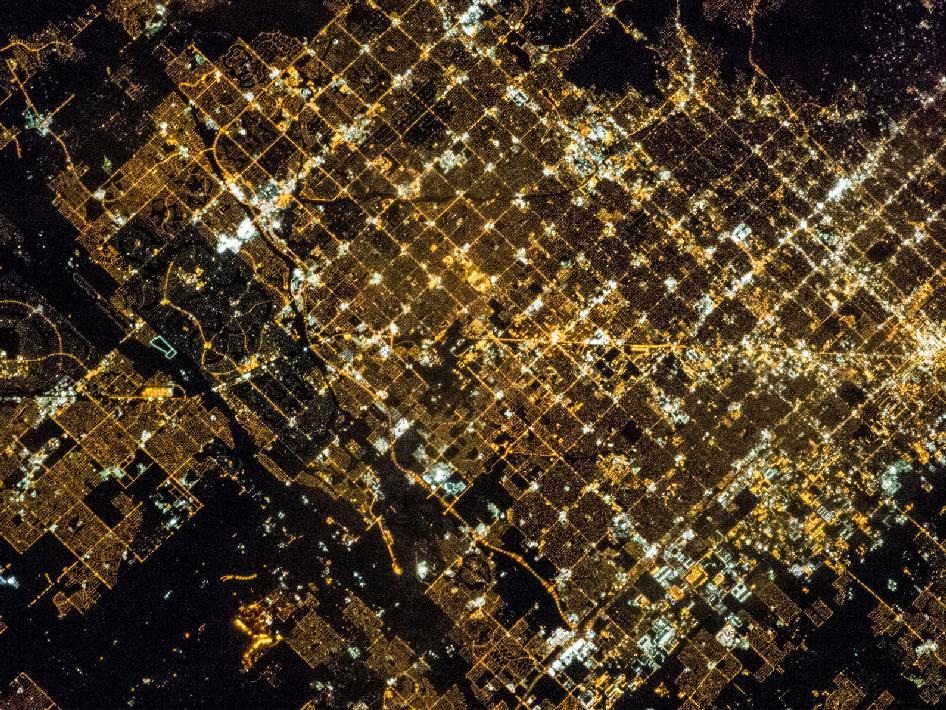 ISS035-E-005438 (16 March 2013) --- One of the Expedition 35 crew members on the International Space Station used a still camera with a 400 millimeter lens to record this nocturnal image of the Phoenix, Arizona area. Like many large urban areas of the central and western United States, the Phoenix metropolitan area is laid out along a regular grid of city blocks and streets. While visible during the day, this grid is most evident at night, when the pattern of street lighting is clearly visible from above – in the case of this photograph, from the low Earth orbit vantage point of the International Space Station. The urban grid form encourages growth of a city outwards along its borders, by providing optimal access to new real estate. Fueled by the adoption of widespread personal automobile use during the 20th century, the Phoenix metropolitan area today includes 25 other municipalities (many of them largely suburban and residential in character) linked by a network of surface streets and freeways. The image area includes parts of several cities in the metropolitan area including Phoenix proper (right), Glendale (center), and Peoria (left). While the major street grid is oriented north-south, the northwest-southeast oriented Grand Avenue cuts across it at image center. Grand Avenue is a major transportation corridor through the western metropolitan area; the lighting patterns of large industrial and commercial properties are visible along its length. Other brightly lit properties include large shopping centers, strip centers, and gas stations which tend to be located at the intersections of north-south and east-west trending streets. While much of the land area highlighted in this image is urbanized, there are several noticeably dark areas. The Phoenix Mountains at upper right are largely public park and recreational land. To the west (image lower left), agricultural fields provide a sharp contrast to the lit streets of neighboring residential developments. The Salt River channel appears as a dark ribbon within the urban grid at lower right.