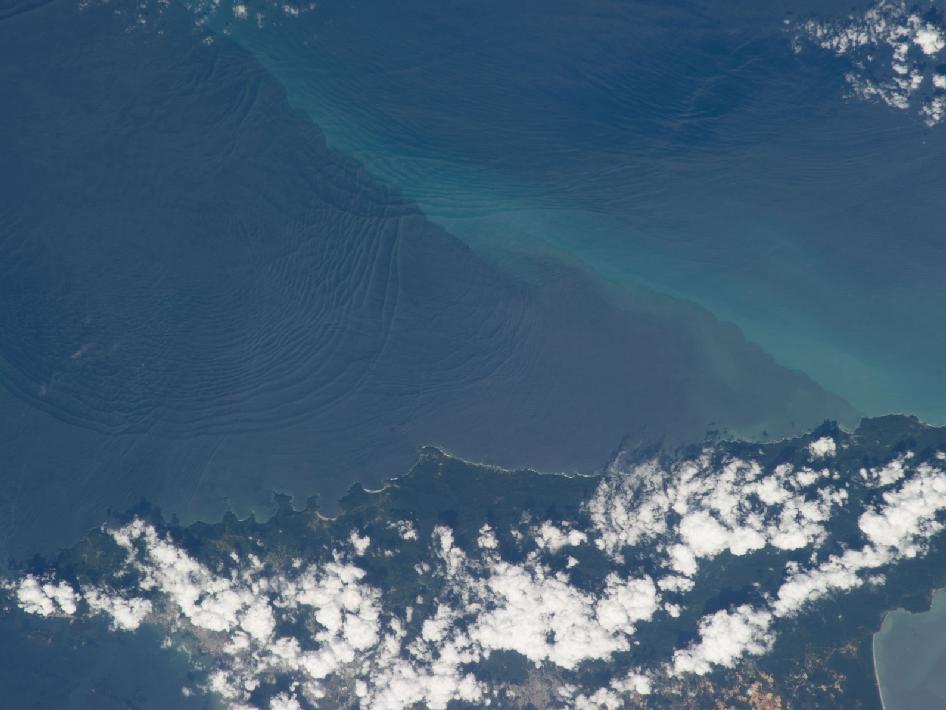 ISS034-E-032377 (18 Jan. 2013) --- Internal waves off Northern Trinidad are featured in this image photographed by an Expedition 34 crew member on the International Space Station. This photograph shows the north coast of the island of Trinidad in the southeastern Caribbean Sea, where heating of the land is setting off the growth of cumulus clouds. The light blue northwest-southeast trending plume at center is sediment from one of the rivers that flows into the sea here. Adjacent to, and appearing to cross the sediment plume, a series of subtle interacting arcs can be seen in the sea. These are known as internal waves which are the surface manifestation of slow waves moving tens of meters beneath the sea surface. These produce enough of an effect on the sea surface to be seen from space, but only where they are enhanced due to reflection of sunlight, or sunglint, back towards the space station. The image shows at least three sets of internal waves interacting. The most prominent set (top left) shows a “packet” of several waves moving from the northwest due to the tidal flow towards the north coast of Trinidad. Two less prominent, younger sets can be seen further out to sea. A very broad set enters the view from the north and northeast, and interacts at top center with the first set. All the internal waves are probably caused by the shelf break near Tobago (outside the image to top right). The shelf break is the step between shallow seas (around continents and islands) and the deep ocean. It is the line at which tides usually start to generate internal waves. The sediment plume at center is embedded in the Equatorial Current (also known as the Guyana Current) and is transporting material to the northwest—in almost the opposite direction to the movement of the internal waves. The current flows strongly from east to west around Trinidad, all the way from equatorial Africa, driven by year-round easterly winds. Seafarers in the vicinity of Trinidad are warned that the current, and its local reverse eddies, make navigation of smaller craft in these waters complicated and sometimes dangerous.