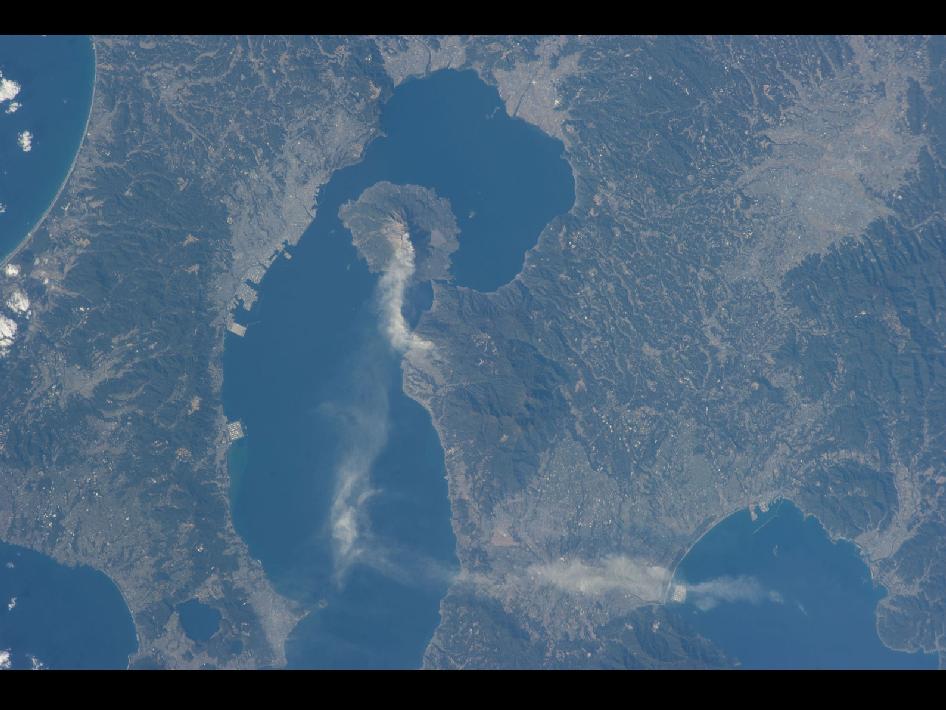 ISS034-E-027139 (10 Jan. 2013) --- Sakurajima Volcano in Kyushu, Japan is featured in this image photographed by an Expedition 34 crew member on the International Space Station. This photograph highlights Sakurajima, one of Japan's most active volcanoes (center). There are several eruption craters near the 1,117 meter summit of Sakurajima; according to scientists, Kita-dake to the north last erupted approximately 5,000 years ago, while Minami-dake and Showa crater to the south have been the site of frequent eruptions since at least the 8th century. The ash plume visible near the volcano summit and extending to the southeast may have originated from either Minami-dake or Showa craters. Scientists believe that Sakurajima began forming approximately 13,000 years ago; prior to 1914, the volcano was an island in Kagoshima Bay—it was joined to the mainland by volcanic material following a major eruption in 1914. The image highlights the proximity of several large urban areas (Aira, Kagoshima, Kanoya, Kirishima, and Miyakonojo are readily visible) to Sakurajima. This has prompted studies of potential health hazards presented by the volcanic ash (Hillman et al. 2012), which are particularly important if more powerful explosive eruptive activity resumes at the volcano. The Tokyo Volcanic Ash Advisory Center (VAAC) of the Japan Meteorological Agency issues advisories when eruptions occur. An advisory on the activity captured in this image was issued less than one hour before the crew member took the photograph, by which time the plume tail had encountered northeast-trending upper-level winds (bottom center).