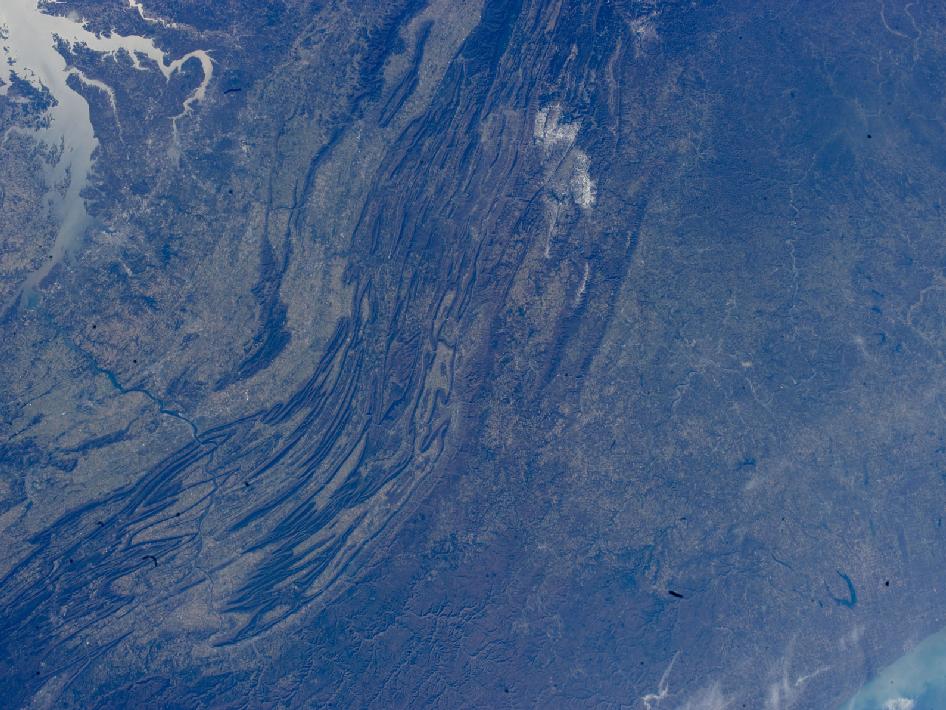 ISS033-E-022378 (17 Nov. 2012) --- The Appalachian Mountains in the eastern Unites States are featured in this image photographed by an Expedition 33 crew member on the International Space Station. This regional view shows the striking visual effect of the valley-and-ridge topography of the Appalachian Mountains as viewed from orbit. The view shows more than 300 miles (500 kilometers) of this low mountain chain, from northeast Pennsylvania (lower left) to southern West Virginia, where a dusting of snow can be seen (top center). Sunglint reflections reveal detail of Chesapeake Bay and the great bend of the Potomac River. Cities are difficult to detect from space during daylight hours, so the sickle-shaped bend of the river is a good visual guide for station crew members trying to photograph the nation’s capital, Washington D.C. (upper left). The farm-dominated Piedmont Plateau is the light-toned area between the mountains and the bay. The Appalachian Mountains appear striped because the ridges are forested; providing a dense and dark canopy cover, while the valleys are farmed with crops that generally appear as lighter-toned areas. Geologically the valleys are the softer, more erodible rock layers, much the preferred places for human settlement. Not only do the larger rivers occupy the valley floors, but all the larger rivers flow in them, soils are thicker, slopes are gentle, and valleys are better protected from winter winds. According to scientists, rocks that form the valley-and-ridge province, as it is known, are relatively old (540-300 million years old), and were laid down in horizontal layers when North America was attached to Europe as the ancient supercontinent of Laurasia. During this time Gondwanaland – an ancient supercontinent that included present-day Africa, India, South America, Australia and Antarctica - was approaching Laurasia under the influence of plate tectonics. The northwest coastline of modern Africa was the section of Gondwanaland that “bumped up” against modern North America over a long period (320 – 260 million years ago), according to scientists. The net result of the tectonic collision was the building of a major mountain chain, much higher than the present Appalachian range—in the process of which the flat-lying rock layers were crumpled up into a series of tight folds, at right angles to the advance of Gondwanaland. The collision also formed the singular supercontinent of Pangaea. The scientists say that, over the following 200 million years, Pangaea broke apart; the modern Atlantic Ocean formed; and erosion wore down the high mountains. What is left to see are the coastline of North America, and the eroded stumps of the mountain chain as the relatively low, but visually striking present-day Appalachian Mountains.