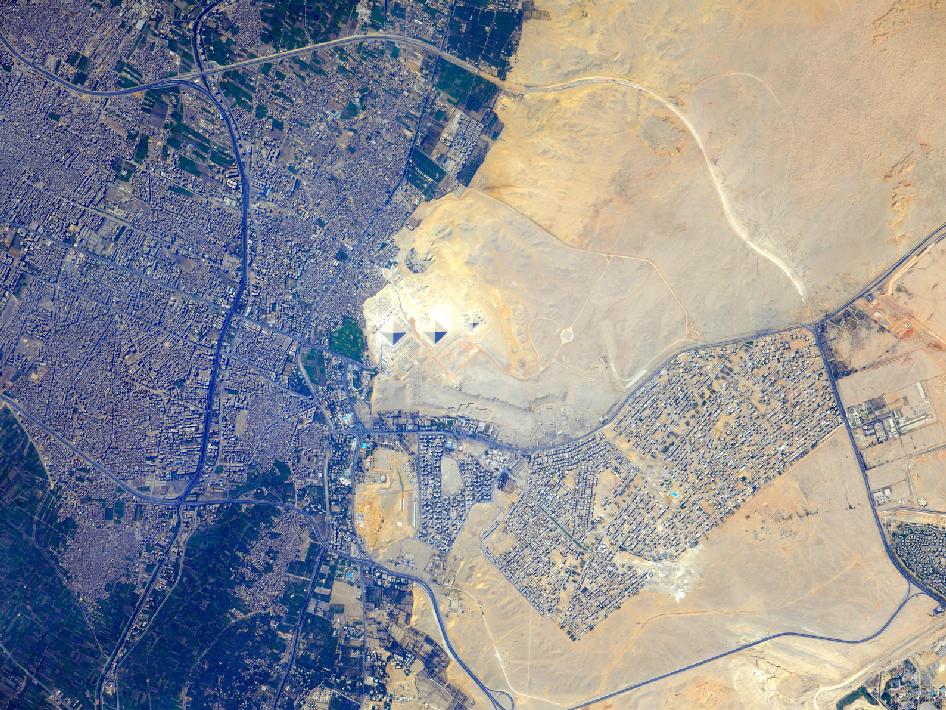 ISS032-E-009123 (26 July 2012) --- Pyramids at Giza, Egypt are featured in this image photographed by an Expedition 32 crew member on the International Space Station. The Great Pyramids at Giza (center) are the last of the Seven Wonders of the Ancient World, and are perhaps the most famous of the ancient monuments in the Nile River Delta region of Egypt. They are also a favorite subject of photography from orbit – particularly when high resolution imagery can be obtained. The southeast-facing sides of the pyramids of the pharaohs Khufu, Khafre, and Menkaure are all brightly illuminated by the sun, while the northwest facing sides are in shadow. This shadowing also highlights smaller unfinished pyramids to the south of Menkaure’s pyramid, as well as fields of rectangular flat roofed mastabas (tombs) to the east and west of Khufu’s pyramid. While not as grand as the pyramids, mastabas were the burial places of prominent persons during the periods of the ancient pharaohs. To the southeast of Khufu’s pyramid, the head and rear haunches of the Sphinx are also visible (albeit not clearly). It is a short distance between the glories of ancient Egypt and the modern Cairo metropolitan area to the north and east. The green vegetation of a hotel golf course (center left), and the numerous building and streets of El Giza, provide stark contrast to the bare rock and soil of the adjacent desert. Roadways visible in the desert (right) connect the urban regions to the east with further development to the north.