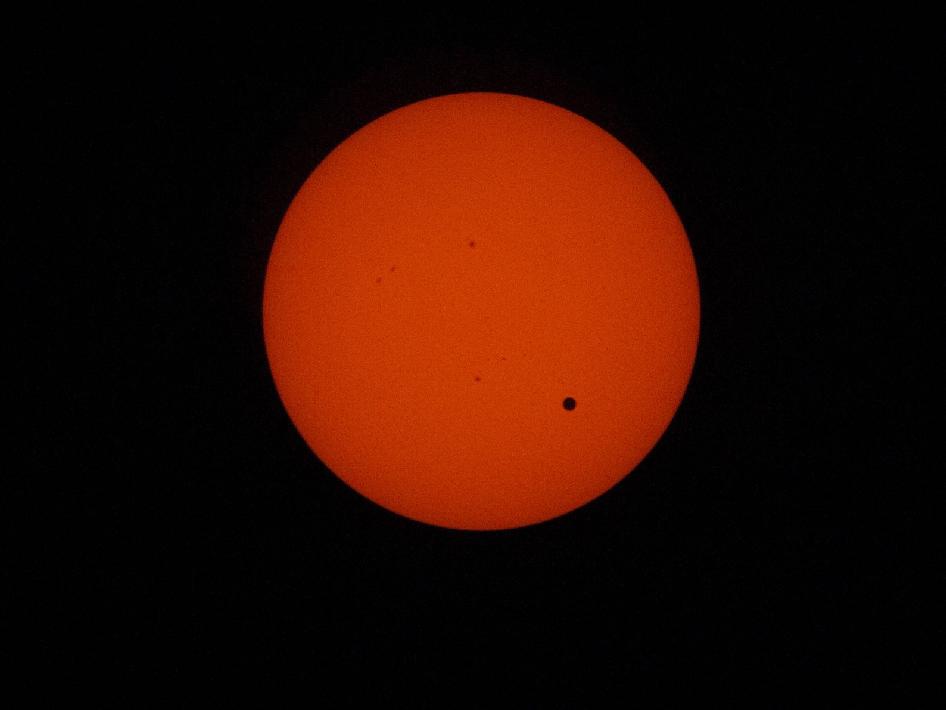 Transit of Venus Across the Sun

ISS031-E-089012 (5 June 2012) --- Transit of Venus across the sun observed from the International Space Station on June 5, 2012. Observations of the transit of Venus during the 17th, 18th and 19th centuries allowed scientists to calculate the distance between Earth and the sun, as well as providing insight into the existence of Venus’ atmosphere. Since the previous pair of transits of Venus occurred in 1874 and 1882, humanity developed the ability to view the phenomena from space – both directly from low Earth orbit, and remotely from sensors on spacecraft collecting scientific data about the sun. NASA astronaut Don Pettit, Expedition 31 flight engineer, was particularly keen to take imagery of the event from the orbital perspective – even bringing a solar camera filter aboard for the event. This image, taken during the first half of the 2012 transit, is one of hundreds of the event taken from the space station Cupola, a windowed module that provides the crew unparalleled views of both Earth and astronomical phenomena. In fact, history will record the station as the first orbital, crewed spacecraft from which the transit of Venus was observed. In addition to the dark circle of Venus visible at lower right, several smaller sunspots visible at center. The transit of Venus across the sun is one of only two such planetary crossings—the other being the transit of Mercury—that are visible from Earth. While transits of Mercury occur 13 times each century, Venus is observed to transit the sun only twice over the same time period (the first transit of the current pair occurred in 2004). Unless you are fortunate enough to be at locations on Earth where the transit is visible both times, this makes the transit of Venus a true “once in a lifetime” event.