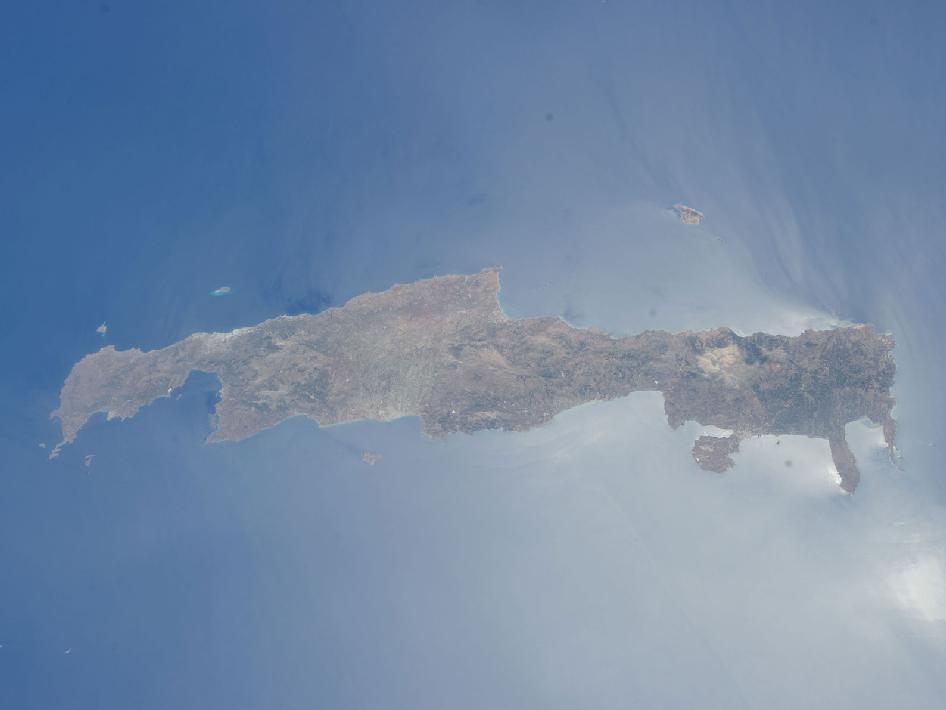 ISS028-E-018562 (22 July 2011) --- Island of Crete, Greece is featured in this image photographed by an Expedition 28 crew member on the International Space Station. In classical Greek mythology the island of Crete was home to King Minos and the terrible Minotaur, a beast that was half man and half bull. The known historical record of Crete is no less impressive. The island was the center of the Bronze Age Minoan civilization that flourished from approximately 2700 – 1420 BC. There is archeological, geological, and cultural evidence to suggest that a cataclysmic volcanic eruption in approximately 1620 BC of Santorini volcano was a major cause of the decline – if not complete destruction – of the Minoan civilization. Today, Crete is the largest and most heavily populated island of Greece (or the Hellenic Republic). The island extends for approximately 260 kilometers and is approximately 60 kilometers across at its widest point. The terrain of Crete is rugged and includes mountains, plateaus, and several deep gorges. The largest city on the island, Heraklion, is located along the northern coastline (center). Several smaller islands ring Crete; two of the largest of these, Dia and Gavdos are sparsely populated year-round, although Gavdos hosts numerous summer visitors. The western and central parts of Crete appear surrounded by quicksilver in this photograph. This phenomenon is known as sunglint, caused by light reflecting off of the sea surface directly toward the observer. The point of maximum reflectance is visible as a bright white region to the northwest of the island (lower right). Surface currents causing variations in the degree of reflectance are visible near the southwestern shoreline of Crete and the smaller island of Gavdos (upper right).