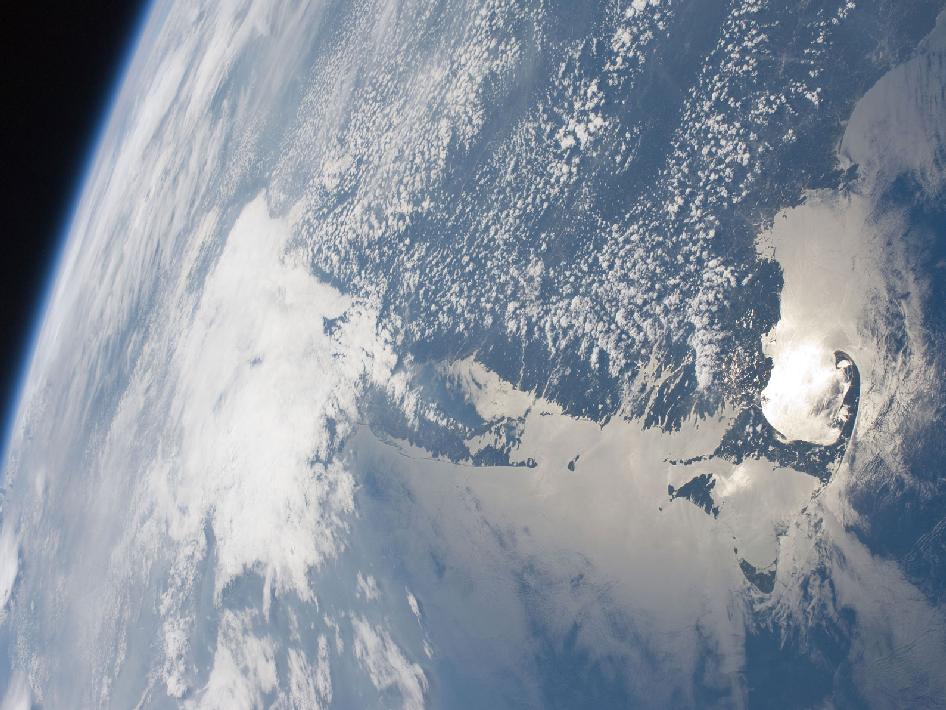 ISS028-E-009979 (27 June 2011) --- The Massachusetts coastline is featured in this image photographed by an Expedition 28 crew member on the International Space Station. The Crew Earth Observations team at NASA Johnson Space Center sends specific ground targets for photography up to the station crew on a daily basis, but sometimes the crew takes imagery on their own of striking displays visible from orbit. One such display, often visible to the ISS crew due to their ability to look outwards at angles between 0 and 90 degrees, is sunglint on the waters of Earth. Sunglint is caused by sunlight reflecting off of a water surface—much as light reflects from a mirror—directly towards the observer. Roughness variations of the water surface scatter the light, blurring the reflection and producing the typical silvery sheen of the sunglint area. The point of maximum sunglint is centered within Cape Cod Bay, the body of water partially enclosed by the “hook” of Cape Cod in Massachusetts (bottom). Cape Cod was formally designated a National Seashore in 1966. Sunglint off the water provides sharp contrast with the coastline and the nearby islands of Martha’s Vineyard and Nantucket (lower left), both popular destinations for tourists and summer residents. To the north, rocky Cape Ann extends out into the Atlantic Ocean; the border with New Hampshire is located approximately 30 kilometers up the coast. Further to the west, the eastern half of Long Island, New York is visible emerging from extensive cloud cover over the mid-Atlantic and Midwestern States. Persistent storm tracks had been contributing to record flooding along rivers in the Midwest at the time this image was taken in late June 2011. Thin blue layers of the atmosphere, contrasted against the darkness of space, are visible extending along the Earth’s curvature at top.