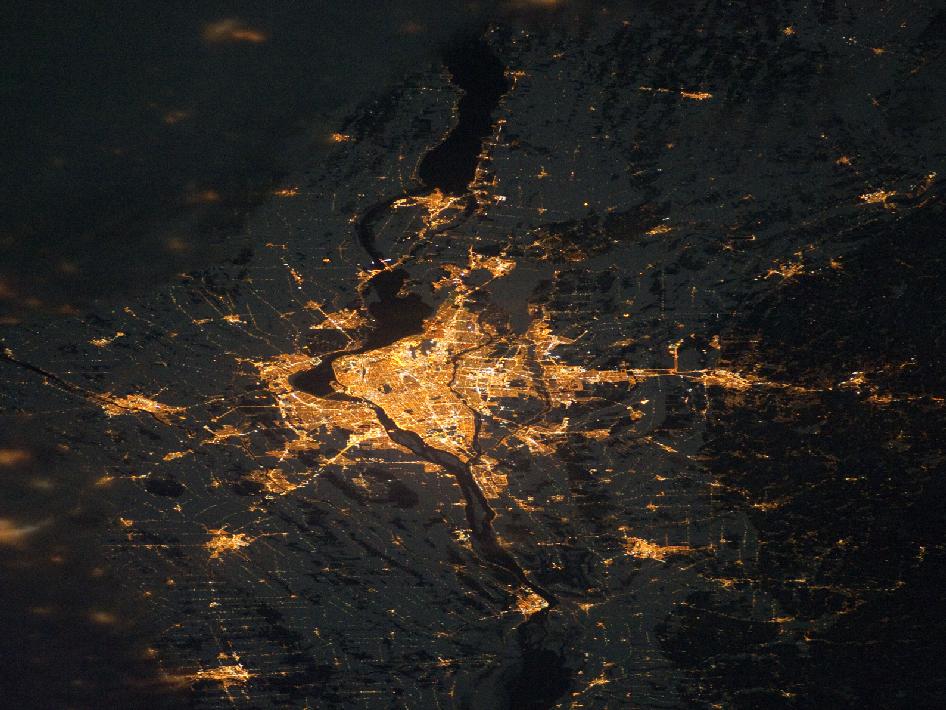 ISS026-E-012474 (24 Dec. 2010) --- A night view of the Montreal metropolitan area is featured in this image photographed by an Expedition 26 crew member on the International Space Station. This photograph of the Montreal, Quebec, Canada metropolitan area (center) illustrates the extent of urbanization made clearly visible by city lights at night. Major roadways and industrial areas are traced by bright white lighting, while the adjacent residential and commercial land uses are characterized by more diffuse yellow-gold lighting. Rivers and other water bodies appear black, while the surrounding rural countryside is faintly illuminated by moonlight. Blurry areas at top and bottom left are caused by cloud cover. Montreal is the largest city in the dominantly French-speaking Province of Quebec. The metropolitan area is the country’s second-largest, having been surpassed by Toronto in 1976. While the city of Montreal proper is located on—and almost completely covers—the Island of Montreal at the confluence of the St. Lawrence (center) and Ottawa Rivers (not visible), the city takes its name from Mont Royal located at the city’s center . Several smaller urban areas form a loose ring around the Montreal metro region: Sorel-Tracy, Saint-Hyacinthe, Saint-Jean-sur-Richelieu, Salaberry-de-Valleyfield, Saint-Jerome, and Joliette are among those that can be readily identified. The International Space Station was located over the Pennsylvania-New York border (near Warren, PA) at the time this image was taken—a ground distance of approximately 600 kilometers southwest of Montreal. This distance from the camera target, coupled with the oblique (inclined) viewing angle from the ISS, results in the foreshortened appearance of urban areas in the image.