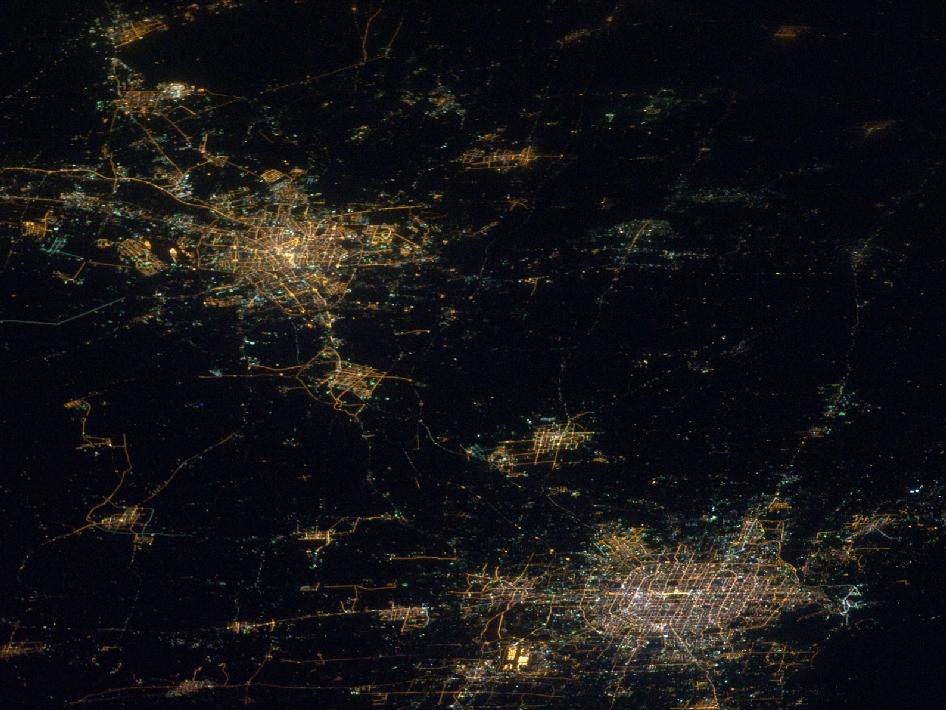 Cities at Night in China

ISS26-E-010155 (14 Dec. 2010) --- Cities at night in northern China are featured in this image photographed by an Expedition 26 crew member on the International Space Station. This striking photograph features two of China’s most populous cities--Beijing and Tianjin--both located in the northern part of the country near the Bohai Gulf. The United Nations estimated 2010 population for the Beijing metropolitan area is approximately 12 million, with the population of the Tianjin metropolitan area estimated to be over 7 million. Taken at night time, the image dramatically indicates the developed extent of both metropolitan areas. The smaller city of Langfang, located midway between Beijing and Tianjin, also is clearly visible as are several other smaller developed areas to the northeast. The dark regions surrounding the well-lit urban areas are mainly agricultural fields, with wheat and corn being the major crops. Beijing (also known as Peking) is one of the recognized ancient capital cities—and the current capital—of the People’s Republic of China. The regular grid pattern of the city is clearly visible at lower upper right; concentric rings of major roadways around the city center have been added as the metropolitan area has expanded. Tianjin is a major trade center with connection to seaports on the Bohai Gulf. The city was established following the integration of the Grand Canal of China, a major artificial waterway extending from Beijing southwards to Hangzhou over a distance of 1,176 kilometers. This image was acquired by astronauts onboard the space station when it was located approximately 630 kilometers away (ground distance) over the Yellow Sea near the western coastline of North Korea. The flattened perspective of the urban areas is a result of the viewing angle and distance from the ISS. The city light patterns are very clear, indicating that there was little cloud cover or haze in the region at the time the image was taken.