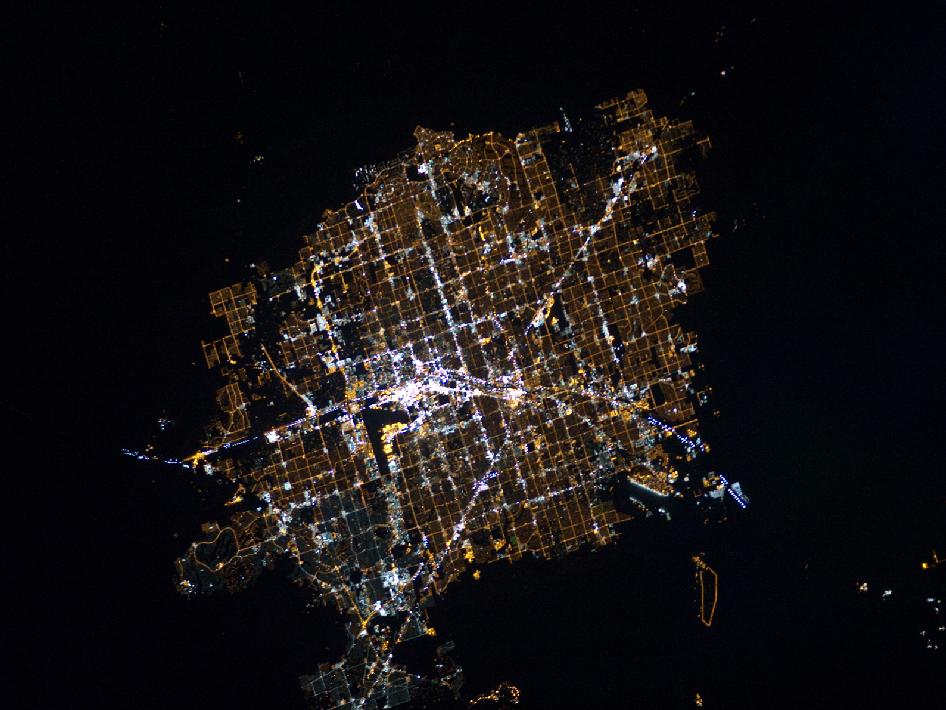 ISS026-E-006255 (30 Nov. 2010) --- This night time image, photographed by an Expedition 26 crew member on the International Space Station, features the Las Vegas, Nevada metropolitan area, located near the southern tip of the state within the Mohave Desert of the southwestern USA. While the city of Las Vegas proper is famous for its casinos and resort hotels – the city bills itself as “the entertainment capital of the world” – the metropolitan area includes several other incorporated cities and unincorporated (not part of a state-recognized municipality) areas. Crew members onboard the ISS observe and photograph numerous metropolitan sites when the areas are illuminated by sunlight, but the extent and pattern of these areas are perhaps best revealed by the city lights at night. The surrounding dark desert presents a stark contrast to the brightly lit, regular street grid of the developed metropolitan area. The Vegas Strip (center) is reputed to be the brightest spot on Earth due to the concentration of lights associated with its hotels and casinos. The tarmac of McCarran International Airport to the south is a dark feature by comparison. The airstrips of Nellis Air Force Base on the northeastern fringe of the metropolitan area are likewise dark compared to the well-lit adjacent streets and neighborhoods. The dark mass of Frenchman Mountain borders the metropolitan area to the east. Acquisition of focused night time images such as this one requires space station crew members to track the target with the handheld camera while the ISS is moving at a speed of more than seven kilometers per second (15,659 miles per hour) relative to Earth’s surface. This was achieved during ISS Expedition Six using a homemade tracking device, but subsequent crews have needed to develop manual tracking skills. These skills, together with advances in digital camera technology, have enabled recent ISS crews to acquire striking night time images of Earth.