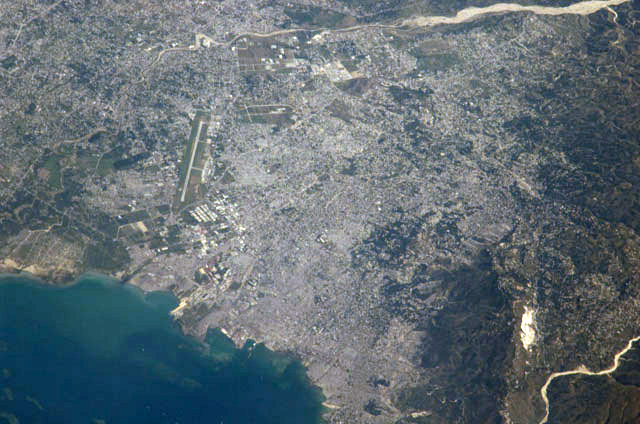 ISS022-E-030482 (18 Jan. 2010) --- An Expedition 22 crew member onboard the International Space Station took this image of the 260-year-old city Port-au-Prince on Jan. 18, 2010 when they could view the area. This was a few days after the major Haitian earthquake occurred and brought devastation to Port-au-Prince, Carrefour, and the surrounding region. The Toussaint Louverture International Airport, clearly visible on the north side of Port-au-Prince, is the central focal point of incoming international aid. The population of Port-au-Prince is estimated to be between 2.5 to 3 million people. The photo was taken with an 800 mm lens setting. 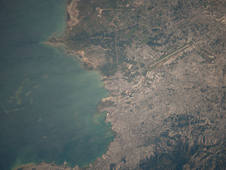 ISS022-E-035426 (22 Jan. 2010) --- Photographed from the International Space Station orbiting Earth at an altitude of 211 statute miles, this image of the Port-au-Prince area of Haiti from Jan. 22 is centered on the area that was heavily damaged by a magnitude 7.0 earthquake on Jan. 12. According to the United States Geological Survey (USGS) Earthquake Center, a number of tremors of varying magnitudes up to 6.0 were recorded in ensuing days. Ships can be easily delineated in the harbor. The single runway of the airport, heavily damaged by the quake, is seen near center of the frame. The airport's control tower was destroyed and has since been rebuilt and is now in service, thanks to part of the huge world-wide aid offered to the nation. 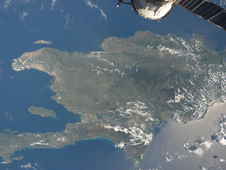 ISS020-E-043301 (28 Sept. 2009) ---- A view of the Caribbean island of Hispaniola from the International Space Station. This island is comprised of Haiti (in the center left of the image) and the Dominican Republic and is part of the Greater Antilles island chain which lies along the geological border of the North America Plate and the Caribbean Plate. A major fault line in the region, Enriquillo-Plantain Garden Fault, runs along the longer peninsula, in the foreground, and just south of Port-au-Prince. Part of a docked Russian spacecraft can be seen in the foreground. The epicenter of the disastrous 2010 earthquake occurred near this fault. This image was taken by the Expedition 20 crew on the International Space Station on Sept. 28, 2009 using a 25 mm lens setting. 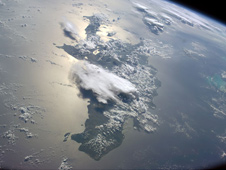 SS017-E-013842 (19 Aug. 2008) --- A serene view of a portion of the Greater Antilles islands in the Caribbean Sea. The island of Hispaniola is in the foreground, comprised of the Dominican Republic and Haiti (in the sunglint). Looking toward the horizon, the eastern tip of Cuba is seen through the clouds and thunderstorms that are scattered over the islands. The light blue shallower areas, to the right or north of Hispaniola and extending toward the Earth’s limb, are the Turks and Caicos islands and the Acklins Islands. The Great Inagua island is off the coast of Haiti. These islands are located along the geological border of the North American Plate (to the right) and the Caribbean Plate (to the left). The photo was taken by the Expedition 17 crew onboard the International Space Station on Aug. 19, 2008 with a 28 mm lens. 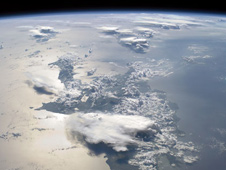 ISS017-E-013843 (19 Aug. 2008) --- A panoramic view of the island of Hispaniola in the foreground and Cuba extending to over the horizon. The sunglint is illuminating Haiti and the Dominican Republic while the thunderstorms persist in the late afternoon of the summertime day. Taken by the Expedition 17 crew onboard the ISS on Aug. 19, 2008 with a 28 mm lens.
› Back To Top