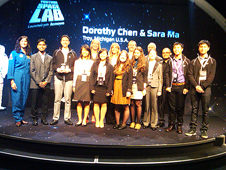 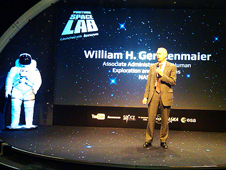 NASA astronaut Suni Williams announced today the two winners in the YouTube Space Lab contest, a global science competition that challenged 14 to 18 year-old students to design science experiments. Dorothy Chen and Sara Ma of Troy, Mich., won the 14-16 year-old category and Amr Mohamed of Alexandria, Egypt, won the 17-18 year-old category. The announcement was made during the awards ceremony that was held at the Newseum in Washington.

Thousands of individuals and teams from more than 80 countries entered the competition for the opportunity to have their experiment flown in space. Williams will perform the winning experiments later this year, 250 miles above Earth, during her mission on the space station.

"Congratulations to Dorothy, Sara, and Amr on winning this truly international competition, and congratulations to all the finalists who made it so far," said William Gerstenmaier, associate administrator for NASA's Human Exploration Mission Directorate. "Through the YouTube Space Lab, we were able to let students become a virtual part of the International Space Station. It is great to see students discover their inner passion for science, technology, engineering and mathematics. I encourage everyone who entered to continue working hard in and keep focused on your goals. Someday, you may become a member of the human exploration team."

"I am proud of all the students who submitted scientific proposals for this competition, and I want to extend special kudos to our three winners who will have a unique role in microgravity science," said Leland Melvin, associate administrator for NASA's Office of Education. "The YouTube Space Lab campaign is an excellent example of how participatory science and exploration opportunities are helping us inspire the next generation of NASA scientists and engineers."

A team of judges, including Gerstenmaier and Melvin, selected 60 finalists. Online voting culled the entrants to the final six. Gerstenmaier will introduce the finalists in the 17 to 18 year-old category at the awards ceremony.

Williams and her crewmates, Yuri Malenchenko of the Russian federal space agency and Akihiko Hoshide of the Japan Aerospace Exploration Agency, are scheduled to launch to the space station in July aboard Soyuz TMA-05M from the Baikonur Cosmodrome in Kazakhstan. Japan's H-II Transfer Vehicle "Kounotori3," a cargo transporter to the International Space Station, also will launch in July carrying the two winning experiments.

Williams will perform the experiments under the auspices of the International Space Station national laboratory. The 2005 NASA Authorization Act designated the U.S. segment of the space station as a national laboratory and directed NASA to develop a plan to "increase the utilization of the ISS by other Federal entities and the private sector…" As the nation's newest national laboratory, the station further strengthens relationships among NASA, other Federal entities and private sector leaders in the pursuit of national priorities for the advancement of science, technology, engineering, and mathematics. The International Space Station National Laboratory is opening new paths for the exploration and economic development of Space. As these activities are ramping up, contests like the YouTube Space Lab are important components of an integrated strategy to inspire the next generation of explorers and scientist using the orbiting outpost.

› Read more about NASA's education programs
› Back To Top