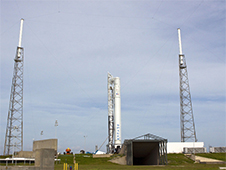 The Space Exploration Technologies, or SpaceX, Falcon 9 rocket is in position for a wet dress rehearsal (WDR) at Space Launch Complex 40 at Cape Canaveral Air Force Station in Florida. During the rehearsal, the rocket will be fully fueled and launch controllers will perform a countdown demonstration. Photo credit: NASA
+ View large image

International Space Station Program managers confirmed the status and readiness of the Falcon 9 rocket and its Dragon cargo spacecraft for the SpaceX CRS-1 mission, as well as the space station's readiness to receive Dragon.

Launch is scheduled for 8:34 p.m. EDT from Space Launch Complex 40 at Cape Canaveral Air Force Station in Florida. A back up launch opportunity is available on Oct. 8.

Media accreditation to view the launch now is open. International media without U.S. citizenship must apply for credentials to cover the prelaunch and launch activities by Wednesday, Sept 26. For U.S. media, the deadline to apply is Wednesday, Oct. 3.

Questions about accreditation may be directed to the Public Affairs Office at NASA's Kennedy Space Center at 321-867-2468. All media accreditation requests must be submitted online at:

The launch of the Dragon spacecraft will be the first of 12 contracted flights by SpaceX to resupply the space station and marks the second trip by a Dragon to the station, following a successful demonstration mission in May. SpaceX services under the CRS contract will restore an American capability to deliver and return significant amounts of cargo, including science experiments, to the orbiting laboratory -- a feat not achievable since the retirement of the space shuttle.

Materials being launched on Dragon will support experiments in plant cell biology, human biotechnology and various materials technology demonstrations, among others. One experiment, called Micro 6, will examine the effects of microgravity on the opportunistic yeast Candida albicans, which is present on all humans. Another experiment, called Resist Tubule, will evaluate how microgravity affects the growth of cell walls in a plant called Arabidopsis. About 50 percent of the energy expended by terrestrial-bound plants is dedicated to structural support to overcome gravity. Understanding how the genes that control this energy expenditure operate in microgravity could have implications for future genetically modified plants and food supply. Both Micro 6 and Resist Tubule will return with the Dragon at the end of its mission.

Expedition 33 Commander Sunita Williams of NASA and Aki Hoshide of the Japan Aerospace Exploration Agency will use a robot arm to grapple the Dragon following its rendezvous with the station on Wednesday, Oct. 10. They will attach the Dragon to the Earth-facing port of the station's Harmony module for a few weeks while crew members unload cargo and load experiment samples for return to Earth.

Dragon is scheduled to return in late October for a parachute-assisted splashdown in the Pacific Ocean off the coast of southern California.

While NASA works with U.S. industry partners to develop commercial spaceflight capabilities, the agency also is developing the Orion spacecraft and the Space Launch System (SLS), a crew capsule and heavy-lift rocket to provide an entirely new capability for human exploration. Designed to be flexible for launching spacecraft for crew and cargo missions, SLS and Orion will expand human presence beyond low Earth orbit and enable new missions of exploration across the solar system.
› Back To Top