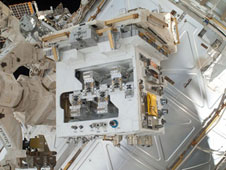 Satellites are designed to withstand a variety of challenges to ensure that the sensitive electronics on board can survive the effects of launch and perform for years in the harsh conditions of space. One of the major hurdles engineering teams face when designing a satellite is how much fuel it can carry to operate throughout its lifetime. Many satellites become space debris after they run out of fuel. But what if we were able to refuel them?

The ability to refuel satellites in space could one day save satellite operators from the significant costs of building and launching new replacement satellites. With over 1,000 active satellites currently operating in the near-Earth environment (many of them worth hundreds of millions of dollars), and an additional 180 decommissioned satellites still orbiting around our planet, the savings would be substantial.

The Canadian Space Agency is collaborating with NASA on the Robotic Refueling Mission (RRM), an experiment on the exterior of the International Space Station. RRM was designed to use Dextre, the station's Canadian-built robotic handyman, to test the technologies, tools and techniques that could be used to service and refuel satellites in orbit, especially those not built to be refurbished. The mission marks the first time that Dextre is being used for a research and development project, and illustrates how the space station is increasingly being used as a technology test-bed.

For RRM, NASA's Goddard Space Flight Center designed a module and tool kit for Dextre. Launched on board the final flight of the space shuttle in 2011, the cube-shaped module is roughly the size of a washing machine (about 550 pounds), and has 28 different pieces and parts found on a typical satellite: caps (similar to the gas cap on a car), nozzles, valves, and wires. The RRM module also has four new tools for Dextre housed inside: a Blanket Manipulation Tool, a Wire Cutter, Multifunction Tool, Safety Cap Removal Tool and Nozzle Tool. The tools (each about the size of a toaster) will allow Dextre to complete tasks like cutting through the simulated satellite's lock wires and blanket tape and removing layers of insulation.

From March 7-9, 2012, Dextre successfully completed the initial phases of RRM, known as the Gas Fittings Removal Task. The operation required Dextre to perform the most intricate work ever performed by a robot in space.

"The Robotic Refueling Mission required surgical precision and Dextre succeeded each task on the first attempt," said Steve MacLean, president of the Canadian Space Agency. "It's the robotic equivalent of threading a needle while standing on the end of a diving board."

Dextre's duties for the first segment of the Gas Fittings Removal task included: retrieving and testing three of the tools to ensure they survived the rigors of launch; releasing seven launch locks that secured four small tool adapters during the module's flight to the space station; and then cutting two extremely thin wires fastening valve caps to the module. One of these cuts required the 12-foot-high Dextre to slide a tiny hook under a wire with only about a millimeter of clearance—the most precise task ever attempted by Canada's state-of-the-art robot.

An International Effort for a Global Problem

On-orbit robotic servicing technologies hold great potential for addressing the issue of space debris, a growing concern for the world's space agencies. Both NASA and the Canadian Space Agency recognize the potential of test demonstrations like RRM to lay the foundation for future missions that might one day be able to send robots to repair, refuel and reposition orbiting satellites.

For RRM, the American and Canadian space agencies assembled an international project team with a vast and varied expertise. NASA's Goddard Space Flight Center has over 20 years of experience in servicing the Hubble Space Telescope, which was done with the iconic Canadarm. Canada brings to the table 30 years of experience with the shuttle's robotic arm, as well as more than a decade of operating Canadarm2 and now Dextre on board the space station. Tests to prepare for on-orbit RRM operations were conducted at Goddard and at MDA in Brampton, Ontario (formerly SPAR Aerospace, the prime contractor for the Canadarm as well as the CSA's Mobile Servicing System on board the station). And RRM operations on board the space station are choreographed and coordinated by ground crews at NASA's Goddard Space Flight Center in Greenbelt, Md.; Johnson Space Center in Houston; Marshall Space Flight Center in Huntsville, Ala.; and the Canadian Space Agency's control center in St. Hubert, Quebec.

In addition to the Canadian robotics on board the International Space Station and projects like RRM, the Canadian Space Agency is also looking ahead to advance state-of-the-of-art space robotics with the Next-Generation Canadarm project, a research and development initiative that is currently developing new robotic architectures, components, tools and techniques for future satellite servicing missions. The work being conducted by the CSA in on-orbit robotics servicing will not only position Canada for exploration missions to come, but will also open doors for commercial applications driven by industry.
› Back To Top