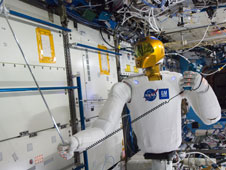 Robonaut 2 – the first dexterous humanoid robot in space – is pictured in the Destiny laboratory of the International Space Station measuring the air flow in front of vents inside the station to ensure that none of the ventilation ductwork gets clogged or blocked. Credit: NASA

The NASA team behind Robonaut 2, the first humanoid robot in space, has been awarded the American Institute of Aeronautics and Astronautics Space Automation and Robotics Award for 2013. AIAA is the world’s largest technical society dedicated to the global aerospace profession.

Robonaut 2, or R2, is a dexterous humanoid robot built and designed at NASA Johnson Space Center in Houston, Texas. Sent to the International Space Station in 2011 with the intention of aiding astronauts on dangerous tasks and freeing them from some the more mundane work, upgrades to the R2 system continue to produce novel advances in the field of robotics.

“The R2 development team is an incredible group of talented people and I am so proud that the team has been recognized with this prestigious honor,” said Dr. Myron Diftler, Robonaut Principal Investigator at NASA Johnson. “To be acknowledged this early in our planned activity on ISS is especially notable. This award from our peers gives us increased confidence that R2 is on a track to even more success as we move towards mobility inside, and then outside the International Space Station.”

The citation for the award reads, “In recognition of the Robonaut 2 Development Team’s pioneering technical achievement and advancement of humanoid dexterous robotics for human space exploration.”

Technologies developed by the R2 team have debuted in spinoff wearable robotic devices. The Robo-Glove, designed to reduce the risk of repetitive stress injuries and provide additional gripping strength to astronauts, is a direct descendant of the actuators and controls found in R2’s hands. Also drawing from the robot’s design team, the X1 exoskeleton device is a robot that a human could wear over his or her body either to assist or inhibit movement in leg joints.

R2 is part of NASA's Game Changing Development Program, which seeks to quickly mature innovative technologies that will have cross-cutting applications throughout agency missions and may also be of benefit to the American aerospace industry. NASA's Game Changing efforts are part of the agency's Space Technology Program, which is innovating, developing, testing and flying hardware for use in future science and exploration missions. NASA's technology investments provide cutting-edge solutions for our nation's future.