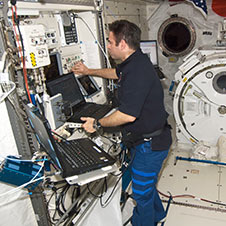 What is the most stressful and the most pleasing part of your daily routine? -- Dick Kashdin, 65, Clarence, New York

Well, I think the most pleasing part surprisingly is actually exercise. You know, I think a lot of us feel like we need to do exercise in our day and take care of ourselves. On Earth, daily, it’s often difficult because we all have things going on in our lives. An important meeting comes up, or something else has to get done, and the first thing that goes is your time for exercise, which is challenging at home. Up here it is so important for us to get exercise, that it’s just part of a schedule, and we have two and a half hours set aside for exercise every day. That sounds like a lot but part of that is getting ready and getting cleaned up after, and actually having that time set aside as a requirement every day is a real luxury. So I really, really, like that a lot. That’s a great thing about every day.

What’s the most stressful thing about the day? I think that it’s just, you know, there’s a schedule here that we’re trying to follow. There’s a lot of things that need to get done, and a lot of work goes into making a plan. And, when that plan falls apart because of a little thing like we can’t find a part, or something is not where we expect it to be, we can start to fall behind on the plan for the day. It always feels better to be ahead than to be behind so I think that’s probably the most stressful thing is when we’re running behind. But, other than that I think pretty much every day is a lot of fun up here.

They say that the sense of smell creates the strongest memories for a person. What does the ISS smell like and what scent do you miss on Earth? -- Owen, San Francisco

You know, the ISS, we’ve got a really good filtering system. There’s air flowing. In fact, everything you hear when you're up here is fans going and air circulating. So, we’re constantly getting a fresh supply of oxygen. We’re constantly getting the carbon dioxide scrubbed and all the other things filtered out. So it really doesn’t smell, although when we first docked with the shuttle there was a noticeable smell but you get accustomed to it very quickly, so I can’t tell anything anymore. There is one smell up here that is really unique though and that is the smell, we just call it “the smell of space.” But we experience it when, I haven’t had a chance to do a spacewalk yet, I’m still waiting and hoping for that, but when the other guys did and they came back in, after we repressurized and opened up the volume for them to come back in the station, there’s this really, really strong metallic smell. And I don’t know exactly what it is, something to do with maybe atomic oxygen interacting with the suit materials, or we’re not exactly sure what it is. It’s a very distinct smell, it’s just the “smell of space.” It’s really cool. But that’s the only smell that’s really strong that I’ve noticed up here other than of course our food. Any wet package you open has a hopefully appetizing smell.

What do I miss on Earth? I think, I haven’t thought about it in terms of smells but I’m sure it’s going to be a big deal when I smell fresh air outside again and the smell of, you know, a pine forest, that kind of thing, I think. That will be great when I can experience that again.

Do you use a common wristwatch on board or do you have a special one? -- Mauricio Londono, Colombia, South America

Well, let me answer the question this way. (Lifts his arm to show the three watches on his wrist.) We’ve got a lot of different watches on board. One of these is actually for an experiment. It’s trying to look at the effect on sleep cycles and studying the amount of light that we’re exposed to and the movement that we have. It’s looking at both of those things in response to being in zero gravity and also the light and day cycles we have up here.

Another watch is a spaceflight-approved watch that NASA issues to us. And, that watch is a regular watch, but it also can keep track of a lot of different times, like GMT and Mission Elapsed Time and regular time, and it has some alarms on it that we can use. So, that’s kind of the daily watch that we use.

And then, I have another watch that I’m using, which is kind of more of a sports timing kind of watch, and I use that to get alarms set by synching it up with a computer for Earth observations because we get – daily – we get a sequence of opportunities to take a picture of something on the ground that has to do with a science observation opportunity from different sites around the world. And, it could be anything from looking at the way water use is affecting a particular region or how a region has changed because of burning or just a current hurricane, something like that that’s happening right now. So, this watch I use to set alarms for that so that throughout the day, the alarm goes off for that, and I can grab a camera, race to a window, and try to capture some pictures.

Anyway, you know, my dad always used to say that somebody with a watch always knows the time, and somebody with two is never sure. So, I’m pretty confused about the time, I guess. 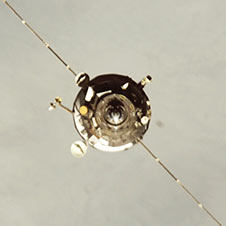 Now that the ISS is almost complete, does it require more frequent "boosting" of its orbit as compared to when it had only a few segments? -- Robert Brodeur, 53, Chateauguay, Quebec, Canada

Actually the amount of boosting that we need to do has to do with how the orbit is changing due to drag, basically. Even though we’re really high up, there are still some particles, some molecules up here. It’s not a complete, perfect, absolute vacuum at this altitude. It’s pretty close. But, the solar arrays on the space station are so big that they sweep out an area and constantly are actually dragging just a tiny little bit. And, so, over time – over a period of months – we do have to reboost the station’s altitude occasionally.

It’s not a matter of the size or the weight of the space station. In fact, it’s kind of the opposite. If the station was much heavier with the same area that it would sweep out with these arrays, it would require less boosting because it would have more inertia and the amount that the force from the atmospheric drag, really, on the arrays, the deceleration that would cause would be less. So, actually, adding more elements now, as long as they’re sort of denser elements toward the core, rather than large elements like the solar arrays, would actually cause less overall deceleration.

We are going to add one more big array, though, to the station, so expect it to have a little more area that it’ll sweep out. Yeah. And, that’ll basically require it to be reboosted a little more frequently. That’s a good question.

Most American households have a "junk drawer" space that collects miscellaneous "stuff" that we can't find a better place for. Is there a storage space like that on the ISS, or do you guys operate under "a place for everything, and everything in its place" rule? -- Ed, 44, Cary, North Carolina

And, yeah, you're right. We need to be able to find things right away when we need them. So, we have a database, a very large database. Everything that needs to be kept track of has a bar code. So, in that sense it operates kind of like a department store or a supermarket. There's a bar code, we can scan it. You have bar codes on all the locations for things, and we can scan things into their locations.

The ground does a lot of work to keep up with this, and it takes us a fair bit of time on orbit. This is something that we know we can improve on that could make things work better in the future.

So, one idea that's come up is to have kind of like an automatic sensor serial number tag. For example, we have a demonstration of this where a bag is full of stuff, and really by just holding the bag in front of a device that can read these tags on everything inside the bag, all these things would basically report their location. The device can say, "Oh, here’s a list of ten things that are in this bag," without having to open the bag.

Ideally, in the future it would be great if you could just tag things and they know essentially where they are. They've been assigned somewhere, and as they move around they could report their own location. I think in the future we’ll see something like that. That'll be really necessary for the future.

With the Olympic Games in progress, Beijing has become the focus of the news. Do you get information about the Olympics or other news? And, how does it feel to read the news while 220 miles above Earth? -- Sicong Li Taiyuan, 16, China

Well, actually, yeah, we get the news. I get daily uplinks of video broadcasts of the news on a couple of different channels. We get electronic versions of newspapers and magazines that we like to read.

And, it's great. It's really a great way for us to feel connected. I think otherwise, you could feel much more isolated up here. Especially, I think, watching a current news report on TV really does a lot to make us feel like we're connected to everybody else on the planet and keeping up with everything.

It was great to watch the Olympics. We had a great time watching it up here. We followed it pretty closely. We basically got highlights of the activities every day. We didn't have that much time to watch it at length, but we certainly followed all of the highlights. It was great for us to be able to do that up here.

Our news is a little bit delayed. Usually I'll watch things the next day that were on TV the day before, but it's really pretty good and a terrific thing for morale on the station. 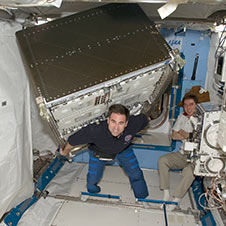 Why can't you get gravity and put some in a jar? What does it look like? -- Emily, 7, Idaho

Well, gravity is one of the fundamental forces of nature, and the truth is we don't understand exactly what gravity is. We see its effect and we know how to measure it. We know that mass creates it. In physics it's a distortion of space-time, and that makes it possible to do some calculations and understand how it behaves.

How to contain it, or concentrate it, or manipulate it or shield from it? We have no idea how to do these things or if they’re even possible, but if they were possible, it would totally revolutionize space travel for one thing and probably a lot of other things on Earth.

This is a very interesting question, and some day I think we're going to understand gravity a lot better than we do now and be able to use it in ways that we never would have thought possible.
› Back To Top