Image above: Backdropped by the blackness of space and Earth’s horizon, this full view of the International Space Station was photographed by a crew member onboard the Space Shuttle Discovery in August 2005. Image credit: NASA

Construction of the world’s largest ship sailing the skies, rather than the seas, at more than 5 miles per second is under way. The International Space Station began with the launch of the Zarya control module in November 1998. Since then, the massive structure in the sky has grown into an unprecedented construction site.

“It’s like building a ship in the middle of the ocean from the keel up,” said Mike Suffredini, NASA station program manager. “You’ve got to float and you’ve got to sail. All this has to occur while you’re actually building the ship, and that’s what station is like.”

With the remaining shuttle missions, NASA will embark on a series of flights as difficult as any in history to complete the space station.

"The flights ahead will be the most complex and challenging we've ever carried out for construction of the International Space Station in orbit," Suffredini said. "The station literally becomes a new spacecraft with each assembly mission, and that will be true starting this year with dramatic changes in its cooling and power systems, habitable volume, utilization capability as well as its appearance." 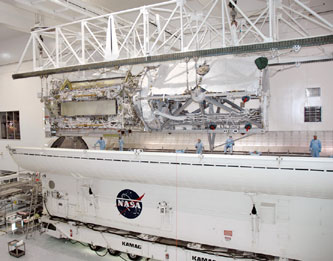 The station is nearly halfway through assembly. The next four flights will bring new truss segments, massive structural support beams, to the complex. The new segments will increase the mass of the station by almost 40 tons, the maximum weight of an 18-wheeled semi-truck.

Two of the trusses include huge sets of solar array wings, totaling more than 17,000 square feet. With a wingspan area the size of a national standard hockey rink, the panels will carry 130,000 solar cells. The new segments include giant rotary joints to allow the tips of the station "backbone" to move as the massive panels track the sun.

Together, the new arrays will add 50 kilowatts of power for the complex, enough electricity for a small housing community. The increased electrical power will set the stage for the addition of European and Japanese laboratories that will far surpass any previous research capability in space.

The installation of the new truss segments and unfurling of the arrays require unprecedented robotic operations. Those operations will use the shuttle and station's Canadian-built mechanical arms to delicately maneuver school bus-sized station components into place.

The operations will rely heavily on the station's mobile transporter, a sort of space railway that positions the robotic arm along the truss to install the components.

Later this year, the station and shuttle crews face a unique challenge to activate a permanent cooling system and the new power sources.

They must rewire the orbiting laboratory and change its electrical supplies without interrupting the continuous operation of any of its critical systems. Once the power grid is in place, additional shuttle flights will launch a connecting node and the European and Japanese laboratories.

"The assembly of the station on these flights has no parallel in space history," Suffredini said. "We have planned, studied and trained for these missions for years. We know they will be hard, and we may encounter the unexpected. But we are eager to get started, and there is tremendous excitement building in NASA and among our international partners."

The station's assembly and maintenance in orbit, the long-duration spaceflight experience gained aboard the complex, and the research into the effects of long spaceflights contribute to NASA's plans for future missions to return to the moon and travel beyond.
› Back To Top