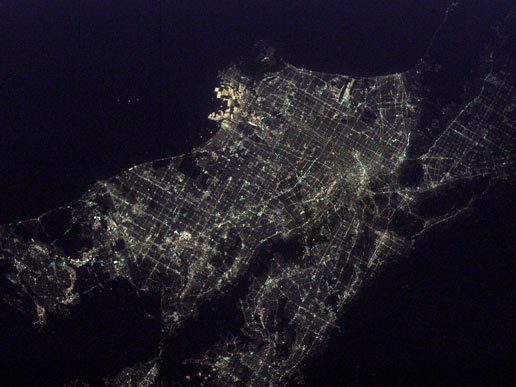 ISS006-E-36913 --- “From the space station, we can see city lights when it’s nighttime on the planet below,” said Flight Engineer Don Pettit of Expedition Six. “Shining upwards through the atmosphere, they twinkle like stars. They’re beautiful.” This nighttime view of Los Angeles, California was captured by one of the Expedition Six crewmembers on board the International SpaceStation. In the north, Hollywood is nestled against the south side of the Santa Monica Mountains. On the coast, Los Angeles International Airport (LAX) and the port facilities at Long Beach Naval Shipyards are also bright spots. The bright lights of Disneyland in Anaheim are also a standout feature. Image credit: NASA