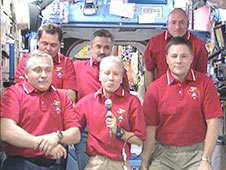 During a press conference the American astronauts discussed voting from space. In the front row (from left) are Flight Engineers Fyodor Yurchikhin and Shannon Walker and Commander Doug Wheelock. In the back are Flight Engineers Oleg Skripochka, Alexander Kaleri and Scott Kelly. Image Credit: NASA TV

While millions of Americans across the country are casting their ballot in elections today, NASA astronauts Doug Wheelock, Shannon Walker and Scott Kelly, of the Expedition 25 crew, are also able to take in the election experience. The three, living and working aboard the International Space Station, voted from 200 miles above the Earth.

“I voted on Sunday through an electronic e-mail system," said Commander Scott Kelly. “It felt like an honor and privilege to exercise our rights as U.S. citizens from the International Space Station."

American astronauts have been able to cast their vote from space since 1997, when Texas House Bill 841 was passed. Astronaut David Wolf was the first astronaut to vote from space while he lived aboard the Russian Mir Space Station in 1997. Others who have voted from space include: Leroy Chiao in 2004, Michael Lopez-Alegria in 2006, Clay Anderson in 2007, and Greg Chamitoff and Mike Fincke in 2008. Ashlé Robinson
› Back To Top