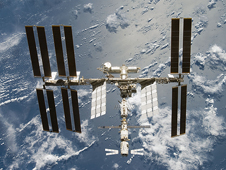 Image above: The International Space Station is seen from space shuttle Discovery as the two spacecraft begin their relative separation, ending docked operations during the STS-124 mission. Credit: NASA
Nations around the world will join together to mark a milestone in space exploration this week, celebrating the 10th birthday of a unique research laboratory, the International Space Station.

Now the largest spacecraft ever built, the orbital assembly of the space station began with the launch from Kazakhstan of its first bus-sized component, Zarya, on Nov. 20, 1998. The launch began an international construction project of unprecedented complexity and sophistication.

The station is a venture of international cooperation among NASA, the Russian Federal Space Agency, Canadian Space Agency, Japan Aerospace Exploration Agency, or JAXA, and 11 members of the European Space Agency, or ESA: Belgium, Denmark, France, Germany, Italy, the Netherlands, Norway, Spain, Sweden, Switzerland and the United Kingdom. More than 100,000 people in space agencies and contractor facilities in 37 U.S. states and throughout the world are involved in this endeavor.

"The station's capability and sheer size today are truly amazing," said International Space Station Program Manager Mike Suffredini. "The tremendous technological achievement in orbit is matched only by the cooperation and perseverance of its partners on the ground. We have overcome differences in language, geography and engineering philosophies to succeed."

Only a few weeks after the U.S.-funded, Russian-built, Zarya module was launched from Kazakhstan, the space shuttle carried aloft the Unity connector module in December 1998. Constructed on opposite sides of Earth, Unity and Zarya met for the first time in space and were joined to begin the orbital station's assembly and a decade of peaceful cooperation.

Ten years later, the station's mass has expanded to more than 627,000 pounds, and its interior volume is more than 25,000 cubic feet, comparable to the size of a five-bedroom house. Since Zarya's launch as the early command, control and power module, there have been 29 additional construction flights to the station: 27 aboard the space shuttle and two additional Russian launches. 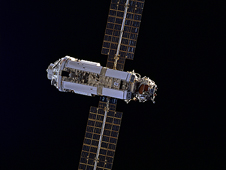 Image above: The Russian-built Zarya module, approaches the out-of-frame space shuttle Endeavour and the U.S.-built Node 1, also called Unity, during the STS-88 shuttle mission. Credit: NASA
One hundred sixty seven individuals representing 15 countries have visited the complex. Crews have eaten some 19,000 meals aboard the station since the first crew took up residence in 2000. Through the course of 114 spacewalks and unmatched robotic construction in space, the station's truss structure has grown to 291 feet long so far. Its solar arrays now span to 28,800 square feet, large enough to cover six basketball courts.

“Sixty years ago, people in Europe were fighting one another,” said Alan Thirkettle, ISS Program Manager, European Space Agency. “Now, they’re working together, working on spacecraft and space stations. Two decades ago, the Cold War was still going on and here we are working with the Russians, the Americans, the Japanese, the Europeans, everyone working together. It seems a far better thing to be doing than what we were doing 60 years ago."

The International Space Station hosts 19 research facilities, including nine sponsored by NASA, eight by ESA and two by JAXA. Cooperation among international teams of humans and robots is expected to become a mainstay of space exploration throughout our solar system. The 2005 NASA Authorization Act recognized the U.S. orbital segment as the first national laboratory beyond Earth, opening it for additional research by other government agencies, academia and the private sector.

By the time the first element launch anniversary rolls around on Nov. 20, the space station will have completed 57,309 orbits of the Earth, a distance of 1,432,725,000 miles. If the station had been traveling in a straight line instead of in orbit, it would have passed the orbit of Pluto and be in the outer reaches of our solar system.

"With the International Space Station, we have learned so many things -- and we're going to take that knowledge and apply it to flying to the moon and Mars," said Expedition 18 Commander Mike Fincke, now aboard the station. "Everything we're learning so close to home, only 240 miles away from the planet, we can apply to the moon 240,000 miles away."

To take a virtual tour of the International Space Station and learn more about the current mission, visit:

To find out how to see the station from your own backyard, visit: