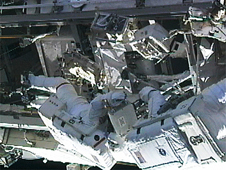 The repair tasks originally included removing the failed pump module from the station’s S1 Truss and retrieving a spare from an external stowage platform. As the result of an ammonia leak in the final line that needed to be disconnected from the failed pump module, the day’s tasks were only partially completed. The decision was made to reconnect the line on the pump module and install a spool positioning device to maintain proper pressure internal to the ammonia line.

Wheelock conducted the fourth spacewalk of his career. Caldwell Dyson made her first spacewalk. Flight Engineer Shannon Walker operated Canadarm2, the station’s robotic arm, and assisted the spacewalkers from inside the station.

The second spacewalk is scheduled to begin just before 7 a.m. EDT Wednesday, Aug. 11.

After the loss of one of two cooling loops July 31, ground controllers powered down and readjusted numerous systems to provide maximum redundancy aboard the orbiting laboratory. The International Space Station is in a stable configuration, the crew is safe and engineers continue reviewing data from the failed pump.

Read about the station's Thermal Control System on page 63 of the "Systems" section of the Reference Guide to the International Space Station. View the entire guide here.
› Back To Top