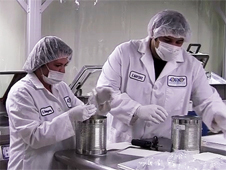 An award-winning “Top Chef” recipe is set to fly to the International Space Station on Discovery’s STS-133 mission.

Chef Angelo Sosa’s recipe for short ribs won a recent challenge on Bravo’s Emmy Award-winning cable reality TV show “Top Chef” to develop a dish for astronauts to eat in space. The announcement was made on an episode of the program that aired in early September.

To flight package the short ribs, a single serving of the product was vacuum packaged into an Extended Duration Orbiter, or EDO, rehydratable package. This package allows the product to be rehydrated with hot or cold water before being eaten in orbit. The packaged short ribs were then shipped to the Kennedy Space Center in Florida. The 12 portions provided will allow both the space station and STS-133 crews to try the product.

Food scientists remained as true to the original Sosa recipe as possible. Some aspects of the original recipe were not completely compatible with the freeze-drying process, so minor modifications had to be made. In addition, the original dish was served with components at different temperatures. The final product, of course, was not able to replicate that.

Upon tasting the processed product, food scientists were very pleased with the result.

“The freeze-dried short ribs are very good,” said Michele Perchonok, NASA food scientist and manager of the Shuttle Food System. “The short rib recipe is unlike any other product that NASA provides to the astronauts. It will add variety to the astronauts’ menu.”

Astronauts report having a diminished sense of taste in space, so the pickled mushrooms and kick of horseradish will be appreciated.

Sosa has cooked alongside Jean-Georges Vongerichten (Jean Georges), Alain Ducasse (Spoon Food & Wine) and Stephen Starr (Buddakan). He is the chef and owner of Xie Xie ("thank you" in Mandarin), an Asian sandwich shop in New York.
› Back To Top