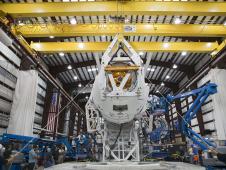 SpaceX is set to launch the first of a dozen operational missions for NASA to deliver more than 1,000 pounds of supplies to the International Space Station on Oct. 7. Launch time is 8:35 p.m. from Space Launch Complex 40 at Cape Canaveral Air Force Station in Florida, just a few miles south of the space shuttle launch pads. The spacecraft will be joined to the station three days later.

The flight, known as CRS-1, will launch and perform the same rendezvous with the station as a previous SpaceX craft.

The SpaceX Dragon capsule will ride into space on the strength of the company's Falcon 9 rocket and the booster's nine first stage kerosene- and oxygen-powered Merlin engines. The Falcon 9's second stage uses a single Merlin engine to boost the Dragon into its final orbit.

Eleven minutes after launch, when the Dragon capsule is safely in orbit, a pair of solar arrays will deploy from the sides of the Dragon and controllers on Earth will begin testing rendezvous sensors.

The mission is similar to the demonstration flight in May when a Dragon was grappled by the station's robotic arm to complete the first rendezvous and berthing by a private spacecraft at the space station.

The SpaceX craft will spend about three weeks connected to the station then it will be released to return to Earth.

A major difference for this mission is that the Dragon will be filled with an amount of cargo suitable for an operational mission. The prior flight carried just enough items to prove the capsule would do its job as a cargo hauler. This time, the manifest will include a freezer for the station's scientific samples, a powered middeck locker with an experiment inside along with a variety of materials for the astronauts living and working on the space station.

The supply flight is part of NASA's Commercial Resupply Services contract, which is paying SpaceX for 12 cargo runs to the orbiting laboratory. The station also is serviced by Russian Progress cargo capsules, European-made and launched Automated Transfer Vehicles, or ATVs, and Japanese-produced H-II Transfer Vehicles, or HTVs. All the cargo ships operate without astronauts or crew members aboard.

Once the spacecraft arrive at the station, the astronauts and cosmonauts onboard unload them and fill them with used materials or unneeded equipment before releasing them.

Here, SpaceX again does something unique. The Dragons are built with heat shields to survive a plunge through the atmosphere and splashdown safely in the ocean under billowing parachutes. The other cargo craft do not carry heat shields, so they just burn up in the atmosphere.

On its return trip, the Dragon capsule will carry more than a ton of scientific samples collected during space station research, along with the freezer the samples have been stored in. Astronauts also will load used station hardware into the capsule for return to Earth where engineers can get a firsthand look at it.

A second kind of American cargo craft is also being developed. The Orbital Sciences' Cygnus spacecraft and Antares rocket are due to make a demonstration flight later this year.