The second decade of a new era in human history -- when not everyone lives on our home planet -- began Nov. 2, 2010, as the International Space Station crossed the 1.5 billion mile mark of its travels with six residents on board and six visitors en route.

On Oct. 25, the station also set a record for being the longest continuously inhabited spacecraft. On that day, the International Space Station eclipsed the previous record of 3,644 days set by the Russian Mir Space Station. With each new day, NASA and its partners are pushing the envelope of human achievement in space into uncharted territory. 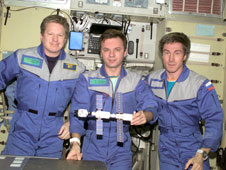 Expedition 1 crew members (from left to right) Commander Bill Shepherd, and Flight Engineers Yuri Gidzenko and Sergei Krikalev pose with a model of their home away from home. Image Credit: NASA

Ten years ago, Bill Shepherd, Yuri Gidzenko and Sergei Krikalev launched into history as the first crew to live on the International Space Station. They blasted off from the Baikonur Cosmodrome in Kazakhstan on Oct. 31, 2000, and docked with the station two days later. From the moment the hatch of their Soyuz spacecraft opened and they entered the fledgling space station, there have been people living and working in orbit, 24 hours a day, seven days a week, 365 days a year.

“As we look forward to the next 10 years, taking us through 2020, the space station will serve many roles,” said Mike Suffredini, International Space Station program manager since 2005. “With its permanent human presence, it will serve as a foothold for long-term exploration into space, being an integral part of testing human endurance, equipment reliability and processes essential for space exploration.”

Before his launch, Expedition 1 commander Shepherd explained that the station “gives us unique access to the space environment where we hope we can do very interesting and productive research, but it really means we [will] develop a lot of the capabilities and technology that’ll allow humans to go elsewhere away from the planet.” 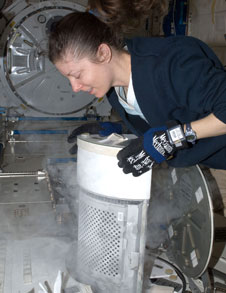 Including the huge solar arrays, the space station is larger than an American football field, including the end zones. Inside its pressurized modules, where residents live, work and sometimes play, it is as large as a five-bedroom home, with two bathrooms, a personal gymnasium and the ultimate 360-degree bay window on the world. Its total habitable volume will be more than 12,000 cubic feet after space shuttle Discovery delivers the complex's next-to-last planned addition.

“To have constructed something on orbit greater than a football field in length, with more internal pressurized volume than a 747, with parts and pieces and participation from 15 countries around the world, full-time 24-hour/7 day a week operations and human presence for 10 years, fills me with an incredible sense of pride in what our organization can accomplish,” said Peggy Whitson, NASA’s chief astronaut and the station’s first female commander on Expedition 16.

With more than 600 experiments under its belt, the orbiting laboratory has provided continuous access that allows researchers and engineers the opportunity to constantly fine-tune their investigations in the unique, nearly zero-gravity environment. As a research outpost, the station is a test bed for future technologies and a research facility for new, advanced industrial materials, communications technology, medical research and more.

“The ISS represents an incredible international engineering accomplishment,” said Whitson, who also was principal investigator for an experiment that evaluated how human kidneys perform in orbit. “The construction, assembly and operations could even be viewed as miraculous if you don’t consider the HUGE efforts of our teams to make it look easy.” 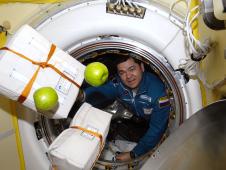 Russian cosmonaut Oleg Skripochka, flight engineer, arrives aboard the International Space Station, bearing fresh fruit and a small sampling of other supplies brought up by the "second half" of the Expedition 25 crew. Image Credit: NASA

The station is a venture of international cooperation among NASA, the Russian Federal Space Agency, the Canadian Space Agency, the Japan Aerospace Exploration Agency and 11 members of the European Space Agency: Belgium, Denmark, France, Germany, Italy, the Netherlands, Norway, Spain, Sweden, Switzerland and the United Kingdom. More than 100,000 people in space agencies and contractor facilities in 37 U.S. states and throughout the world are involved in this endeavor.

"The partnership, which constructed the station, will serve as the foundation for the international technological collaboration needed to further man’s reach into space, Suffredini said. “The station's capability and sheer size today are truly amazing. The tremendous technological achievement in orbit is matched only by the cooperation and perseverance of its partners on the ground. We have overcome differences in language, geography and engineering philosophies to succeed."

While people on Earth have come together to build and operate the complex, the resident crews from around the world have also come together in space. May 2009 saw the station become home to its first six-person crew, Expedition 20, which also marked the first time at least one crew member from each of the supporting space agencies was aboard at the same time. 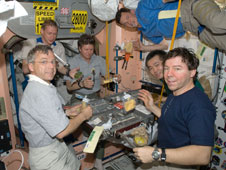 The Expedition 20 crew members share a meal in the Unity node of the International Space Station. Image Credit: NASA

The International Space Station boasts 29 research facilities, providing an example of cooperation by humans and robots that is expected to become a mainstay of space exploration throughout our solar system.

When asked what his favorite memory while aboard station was, Expeditions 19 and 20 Flight Engineer Mike Barratt said, “The Earth views were stunning and microgravity is incredible, but my strongest memories were gathering around the galley table for food, music, and ward room conversation. Everyone who wasn’t on the planet was at dinner there!”

Garrett Reisman, a flight engineer on Expeditions 16 and 17, said one of his favorite memories was spending a week sleeping in Columbus, the ESA-provided laboratory module.

“There’s a window in the node about the size of a small dinner plate. As I lay in my bunk, the Earthshine would come through the window and light up the ceiling of Node 2 (also known as Harmony), and I could see the reflection of the Earth. There wasn’t a lot of detail, but enough that I could see clouds and land formations.”

What started out with a crew of three “turning on the lights” continues today with a crew of six conducting science experiments and maintaining their home away from home. 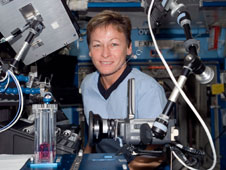 “The stations that support long duration spaceflights are a basis, a foundation for any remote missions,” said Expedition 1’s Russian flight engineer Krikalev, “because remote missions tend to be lengthy missions and we have learned to fly for a long time and to support life on board for a long time, and we learned how to build life support systems accordingly."

“The second factor is further development of international cooperation,” Krikalev continued. “We had some doubts whether we would be able to be building significant projects together and whether we will be able to complete them and the station is a good illustration that we’re capable of doing that and we have achieved the result we wanted to achieve together.”

Each international partner is allotted a certain amount of resources for research and technology development, including crew time when it is needed to support an experiment. NASA currently uses about half of its available assets on the station for its own research, which leaves the other half for users eligible under U.S. National Laboratory guidelines established by Congress in 2005.

“As a National Laboratory,” Suffredini added, "[the station] will provide opportunities to academia, commercial entities and other government agencies to pursue their research and development needs in support of a wide range of scientific inquiries in biology, human physiology, physical, materials, Earth and space sciences. Station will also be the first destination of commercial endeavors in low-Earth orbit with the safe delivery of cargo and crew.” 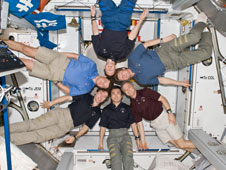 The six-person Expedition 20 crew poses in "star-burst" formation for an in-flight portrait in the Harmony node of the International Space Station. Image Credit: NASA

“We work with a number of other government agencies,” said Marybeth Edeen, National Laboratory manager, “and we have a number of commercial customers who are using station for their objectives, be they commercial or research or business.”

“The NASA mission-driven research includes some microgravity, physical and life sciences, the Human Research Program (HRP), NASA exploration technology development and the Science Mission Directorate,” said Dr. Julie Robinson, program scientist for space station. “For example, our HRP is testing things and evaluating the effects of space on the human body and what you might need to do for astronauts to go beyond Earth orbit safely.”

The station is an unprecedented, state-of-the-art, orbiting laboratory complex that continues to expand the boundaries of space research. Its life-support systems are taking recycling into uncharted territory as residents drink much of the same water and breathe much of the same air over and over. The unique capabilities of its systems and laboratories will lead to discoveries that will benefit missions farther into outer space. These discoveries will also benefit people all over the world, now and in the future.

“With another 10 years of operating a mature ISS, we should expect and realize the science returns for which the station was built. We owe the world answers on questions of basic science and medicine, and the ISS can deliver abundantly if utilized carefully,” Barratt said. “In addition we must come out with the mature and tested technologies and systems to go further with confidence. All of the partner agencies and nations hold stake in these, and the ISS becomes a unique high tech glue that holds the international space community together in ways unimaginable without it.”
› Back To Top