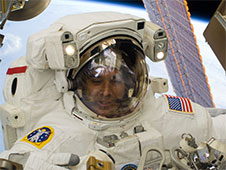 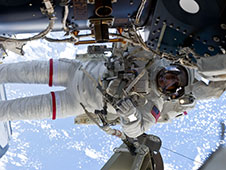 Spaceflight trivia contest: Tweet to test your knowledge and become a virtual crewmember aboard the International Space Station! Follow @AstroRM on Twitter and get a chance to fly your picture to the ISS with Astronaut Rick Mastracchio.

Astronaut and Flight Engineer Rick Mastracchio is assigned to serve on International Space Station (ISS) Expeditions 38 and 39. The mission is scheduled for launch November 2013 and landing May 2014. Before launch, Flight Engineer Mastracchio and his crew members will participate in a number of training activities to prepare them for their jobs on the mission, include a wide spectrum of disciplines, from science research and on-orbit medical operations to spacewalk procedures and robotics. His training will also include extensive travel to other station partner countries, such as Japan and Russia, to practice and learn the specialized hardware and equipment provided by these nations. Flight Engineer Mastracchio will share with the public ‘behind the scenes’ of what it’s like to train like an astronaut for a mission aboard the International Space Station via Twitter.

Train alongside Flight Engineer Mastracchio as a “virtual crewmember!” Follow @AstroRM, who will tweet and share his training experience during his finals months of mission preparations. Followers will learn about human space exploration, astronaut training and the research and technology aboard the International Space Station.

On a monthly basis, Mastracchio will ask a trivia question about his training for followers to answer. The first person to reply to @AstroRM with the correct answer wins. Use the hashtag #ISSFE7 after your reply. Players who win will have their picture uplinked to ISS where Mastracchio will photograph the picture with the Earth in the background. Mastracchio will then share the photo via Twitter highlighting the winner as a “Virtual Crewmember” on his ISS mission. Each month, the trivia question and answer will be posted here on nasa.gov along with the winner’s name.

Stay tuned for next month’s trivia question! You could be the mission's 7th crewmember. Follow up for research, training, positions, ISS science and technology:
› Back To Top