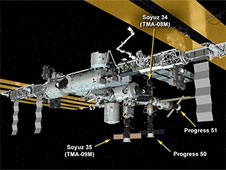 Artist's rendering of the International Space Station with the ISS Progress 51 attached to the Zvezda service module. Credit: NASA TV

The Progress 51 delivered 3.1 tons of food, fuel and equipment for the station crew on April 26. It had launched two days earlier from the Baikonur Cosmodrome in Kazakhstan. However, after reaching orbit one of its antennas for the KURS automated rendezvous system did not deploy.

As the Progress cargo craft departed, the ship's external cameras focused on navigational sensors on the Zvezda docking port. Imagery was gathered to confirm the sensors were not damaged when the Progress arrived at the station with one of its navigational antennas folded against its side. Those sensors are required for a new cargo ship to dock properly June 15.

The Progress 51 will orbit Earth at a safe distance from the station for a few days while controllers in Moscow perform engineering tests. Afterwards, the cargo craft will re-enter the atmosphere over the Pacific Ocean for a fiery disposal.

Meanwhile, Europe’s Automated Transfer Vehicle-4 (ATV-4) is closing in on the station waiting to occupy the same port that hosted the Progress 51. Nicknamed the “Albert Einstein,” the ATV-4 will automatically dock to the station June 15 after launching ten days earlier from Kourou, French Guiana, atop an Ariane 5 rocket.

› Read more about the launch of the ATV-4