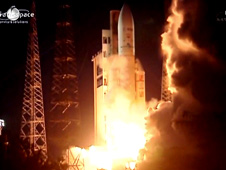 › Watch a video of the ATV-4 launch

More than an hour and a half after launch, ATV-4 deployed its solar arrays, which unfolded to generate power from sunlight.

The 13-ton ATV-4, or "Albert Einstein" spacecraft, named by ESA in honor of the 20th century theoretical physicist and icon of modern science, will deliver more than 7 tons of supplies to the station when it docks to the aft port of the Russian Zvezda service module on Saturday, June 15.

Before the ATV-4 arrives at the station, the Russian ISS Progress 51 cargo spacecraft will undock from the Zvezda port at 9:59 a.m., Tuesday, June 11.

As the Progress cargo craft departs, the ship's external cameras will focus on navigational sensors on the Zvezda docking port to gather imagery and confirm the sensors were not damaged April 26 when Progress docked to the station with one of its navigational antennas folded against its side. Those sensors are required for the ATV-4 to dock properly June 15.

Aboard the station Wednesday, the six Expedition 36 crew members focused on science, maintenance and orientation activities. 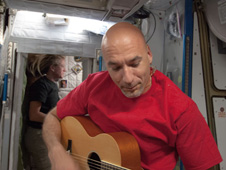 Flight Engineer Luca Parmitano plays a guitar during some of his off-duty time aboard the International Space Station. Flight Engineer Karen Nyberg is seen in the background on the left. Credit: NASA

Flight Engineers Chris Cassidy, Karen Nyberg and Luca Parmitano performed eye exams as part of the station’s Health Maintenance System. The data was then downlinked for analysis by medical ground support teams to study the effect of microgravity on sight.

Nyberg and Parmitano had some time scheduled for station orientation and training with Cassidy, who has been living aboard the orbiting laboratory since March.

Nyberg, Parmitano and Flight Engineer Fyodor Yurchikhin, who arrived aboard the station on May 28, will have time set aside over the next few weeks for a variety of crew orientation activities to help familiarize themselves with their new orbital home.

› Read more about the Expedition 36 launch and docking

Commander Pavel Vinogradov and Flight Engineer Alexander Misurkin worked with the Bar experiment, which looks at methods and instruments for detecting the location of an air leak from one of the station’s modules.