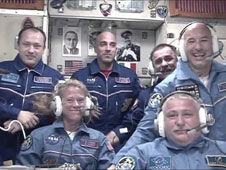 The newly arrived flight engineers and their Expedition 36 crewmates aboard the International Space Station speak with family members and spaceflight officials gathered at Baikonur Cosmodrome in Kazakhstan. Credit: NASA TV 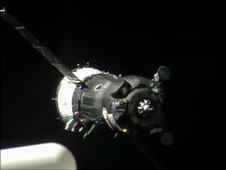 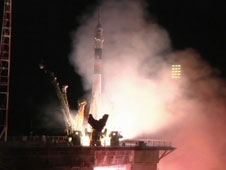 The Soyuz carrying the three new Expedition 36 flight engineers docked with the station’s Rassvet module at 10:10 p.m. EDT Tuesday, completing its journey from the launch pad to the orbiting complex in less than six hours. The trio launched from the Baikonur Cosmodrome in Kazakhstan at 4:31 p.m. (2:31 a.m. Wednesday, Baikonur time) to begin the accelerated four-orbit journey to the station.

Flight Engineer Chris Cassidy of NASA and Commander Pavel Vinogradov and Flight Engineer Alexander Misurkin of Russian Federal Space Agency, who arrived at the station March 28, welcomed the new crew members aboard their orbital home. All six crew members then participated in a welcome ceremony with family members and mission officials gathered at Baikonur.

Expedition 36 will operate with its full six-person crew complement until September when Cassidy, Vinogradov and Misurkin return to Earth aboard their Soyuz TMA-08M spacecraft. Their departure will mark the beginning of Expedition 37 under the command of Yurchikhin, who along with crewmates Nyberg and Parmitano will maintain the station as a three-person crew until the arrival of three additional flight engineers in late September. Yurchikhin, Nyberg and Parmitano are scheduled to return to Earth in November.

During the 5 ½-month timeframe of Expedition 36/37, the crew is scheduled to conduct five spacewalks to prepare the complex for the installation of the Russian Multipurpose Laboratory Module in December, as well as a Nov. 9 spacewalk to take the Olympic torch outside. The crew also will welcome the arrival of several visiting cargo vehicles: ESA’s “Albert Einstein” Automated Transfer Vehicle-4 in June, a Russian Progress cargo craft in July and the Japan Aerospace Exploration Agency’s H-II Transfer Vehicle-4 in August.

Even with the challenges of managing visiting vehicle traffic and six spacewalks, the crew will continue supporting a diverse portfolio of research and technology experiments. Among the investigations that will be joining the list of approximately 1,600 station science studies conducted so far is the Hip Quantitative Computed Tomography (QCT) experiment, which will evaluate countermeasures to prevent the loss of bone density seen during long-duration space missions. The experiment, which uses 3-D analysis to collect detailed information on the quality of astronauts’ hip bones, also will increase understanding of osteoporosis on Earth.

The station’s crew will continue research into how plants grow, leading to more efficient crops on Earth and improving understanding of how future crews could grow their own food in space. The crew also will test a new portable gas monitor designed to help analyze the environment inside the spacecraft and continue fuel and combustion experiments that past crews have undertaken. Studying how fire behaves in space will have a direct impact on future spaceflight and could lead to cleaner, more efficient combustion engines on Earth.

This is the second space mission for Nyberg, who holds a doctorate in mechanical engineering. She visited the station in 2008 as an STS-124 crew member aboard space shuttle Discovery on a mission to deliver and install pressurized module portion of the Kibo laboratory and its robotic arm.

For Yurchikhin, this is his fourth spaceflight. He flew to the station in October 2002 aboard space shuttle Atlantis. He also participated in two long-duration missions aboard the station, first as an Expedition 15 crew member in 2007 and then as a member of Expedition 24/25 in 2010. Yurchikhin has performed five spacewalks and spent more than 371 days in space.

› Watch the Expedition 36 crew prep for launch in Kazakhstan