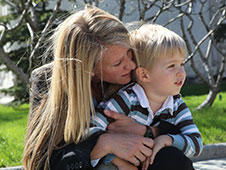 Expedition 36/37 Flight Engineer Karen Nyberg of NASA shares a quiet moment with her son during a tour of the Kremlin and Red Square in Moscow May 8. Photo credit: NASA 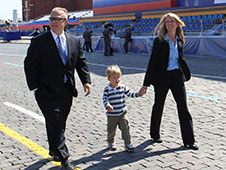 Expedition 36/37 Flight Engineer Karen Nyberg (right) takes a stroll through Red Square in Moscow in front of a grandstand and the Kremlin May 8 with her husband, astronaut Doug Hurley (left) and their son. Red Square was decorated for commemorative activity in honor of Russian Victor Day May 9. Photo credit: NASA

Astronaut Karen Nyberg is just a few weeks from launching for her long-duration mission to the International Space Station. And, as the mother of a young son, Karen says she will be savoring this Mother’s Day weekend before departing for Kazakhstan, and ultimately space.

In this interview, Karen answers questions from Parenting magazine’s Elina Bolokhova about the unique aspects of being an Astronaut mom and how she is preparing for her spaceflight and family life while living 200 miles above Earth for the next several months.

Karen is not the first space station astronaut to face the challenge of parenting from space. Many astronauts, male and female, have served in space with spouses and children on Earth especially through the three decades of shorter space shuttle missions. However, two previous women astronauts have left the bounds of Earth to work in space for extended missions while having children at home. Both Nicole Stott and Cady Coleman served as Flight Engineers for long-duration missions with elementary-school-aged sons. Stott shares thoughts about motherhood from space in this interview.

Karen has had a long time to prepare the mission and subsequent absence from family. Named to this flight in early 2011, she and her crew have spent about half of their time each year traveling to different training facilities across the globe. Once in space, astronauts have numerous ways to stay connected with their friends and family. They have email capability, which is “synched” through Mission Control daily, as well as use of an Internet Protocol phone – so they can literally call friends and family whenever they have free time and communications satellite coverage. They also have weekly video conferences, usually planned for the weekends.

All three emphasize that while they miss their families immensely while in-orbit, the work and science research being achieved on the space station is invaluable to researchers back on Earth and makes it all worthwhile.

Cady Coleman recently shared with CNN about the vast array of science being done onboard the space station.

And, Karen Nyberg shared her thoughts in this special message about her upcoming mission.

The majority of a crew members time in space is focused on a wide array of scientific research in the various laboratories aboard the space station. On any given day, a crew member may work on medical observations, conduct experiments studying different physical and materials sciences, or support biology experiments – involving plant growth or even how small creatures, such as spiders, behave in space.

More than 200 experiments are planned for Karen’s mission alone. She will serve as the eyes, ears and hands on-orbit for more than 400 researchers on the ground who use the data from these experiments to help improve life on Earth. Already there are numerous benefits from space station research, including improved telemedicine techniques that now help patients in rural and remote areas on Earth, better robotics technology that can now perform intricate surgical procedures on Earth, and advanced water filtration and purification systems, making a life-saving difference in communities without access to clean water. In fact, research from the station also is being used to develop a potential vaccine for Salmonella bacteria-caused ilnesses. Salmonella infection is one of the most common forms of food poisoning worldwide. Salmonella-caused diarrhea remains one of the top three causes of infant mortality, so a vaccine has the potential to make dramatic improvements in health for developing countries.

The astronauts also use various channels to share their mission as much as possible with the rest of us. From dramatic photos and videos to science demonstrations and social media, sharing their experience is a valuable outlet for many of the space explorers. Onboard now, Expedition 35 Commander Chris Hadfield and Flight Engineer Tom Marshburn are both tweeting using @Cmdr_Hadfield and @AstroMarshburn

Karen’s been sharing her thoughts and special moments via Twitter and gaining a growing following for her #SimpleJoysOnEarth hashtag series, which captures a lot of “everyday moments” that she’s learned to treasure as her mission nears. You can follow Karen tweets under @AstroKarenN or get more information on Karen and her mission: http://www.nasa.gov/mission_pages/station/expeditions/expedition36/index.html

Karen Nyberg Resources can be found at the following links: