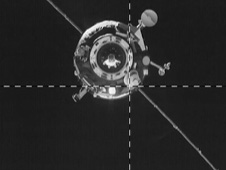 Flight Engineers Pavel Vinogradov and Roman Romanenko monitored the docking while at the controls of TORU, the Russian telerobotically operated rendezvous system, ready to take manual control of the automated docking process if difficulties arose.

After conducting leak checks at the docking interface, the Expedition 35 crew members opened the hatches to the cargo craft at 11:39 a.m. and began the long process of inventorying and unloading its 3.1 tons of food, fuel and equipment.

The unpiloted cargo craft launched from the Baikonur Cosmodrome in Kazakhstan at 6:12 a.m. on Wednesday loaded with 1,764 pounds of propellant, 48 pounds of oxygen, 57 pounds of air, 926 pounds of water and 3,483 pounds of spare parts, experiment hardware and other supplies for the station crew.

› Watch a video of the Progress launch

Flight Engineer Tom Marshburn had some time scheduled to work with the Capillary Flow Experiment, which investigates how fluids flow across surfaces in a weightless environment. Results from this experiment will improve computer models used to design fluid transfer systems and fuel tanks on future spacecraft. 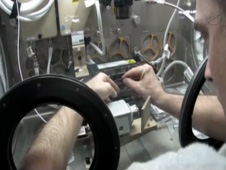 Flight Engineer Chris Cassidy worked with an experiment known as Burning And Suppression of Solids, or BASS, which studies how a variety of solid materials burn and extinguish in microgravity. Results from BASS may lead to improvements in spacecraft materials selection, strategies for extinguishing accidental fires aboard spacecraft and improved computational models used in the design of fire detection and suppression systems here on Earth.

Commander Chris Hadfield and Marshburn worked with the Reversible Figures experiment which investigates a crew member’s perception and orientation in space.

Hadfield and Cassidy also performed eye exams as part of the station’s Health Maintenance System. The data was then downlinked for analysis by medical ground support teams to study the effect of microgravity on sight.

Over the weekend, the station residents will continue ongoing scientific research and perform their regular maintenance duties. They also will enjoy some off-duty time and have an opportunity to speak with family members.

› Read more about Expedition 35
› Back To Top