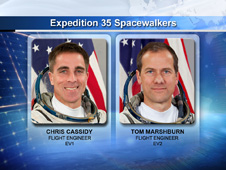 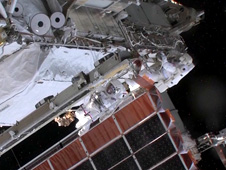 Flight Engineers Chris Cassidy and Tom Marshburn work on the exterior of the International Space Station during their spacewalk. Credit: NASA TV

A little more than 2 1/2 hours into the spacewalk, Cassidy and Marshburn removed the 260-pound pump controller box from the P6 truss and replaced it with a spare that had been stowed nearby on the port-side truss, or backbone of the station. Mission Control ran the new pump while the spacewalkers watched for any ammonia snowflakes, but so far there have been no new signs of a leak. Long-term monitoring of the pump will be required to determine whether the pump replacement has fixed the leak.

As the spacewalkers prepared the reenter the station, Chris Cassidy took a moment to radio down to Earth his thanks to Marq Gibbs, longtime lead diver at NASA's Sonny Carter Training Facility Neutral Buoyancy Laboratory (NBL), who died unexpectedly last week at age 43. Spacewalkers practice underwater in the facility and divers provide assistance and dive safety protection during spacewalk simulations.

Station managers and the international partners approved plans late Friday to conduct the spacewalk after a day-long review of procedures and the crew’s preparations to support the excursion.

A leak of ammonia coolant from the area near or at the location of a Pump and Flow Control Subassembly was detected on Thursday, prompting engineers and flight controllers to begin plans to support the spacewalk. The device contains the mechanical systems that drive the cooling functions for the port truss.

The P6 truss was launched to the station as the oldest component of the station’s backbone aboard the shuttle Endeavour on the STS-97 mission in November 2000. It was relocated from its original installation position to the far left side of the station during the STS-120 mission of the shuttle Discovery in October/November 2007. 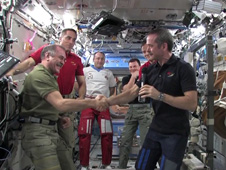 The station crew members participate in a change of command ceremony on Sunday. Credit: NASA TV

The spacewalk is the 168th in support of the assembly and maintenance of the space station and the third for both Cassidy and Marshburn, who conducted two spacewalks together during the STS-127 mission of the shuttle Endeavour to the station in July 2009.

› Watch the change of command ceremony

The undocking of the Soyuz TMA-07M spacecraft set for 7:08 p.m. EDT Monday will officially mark the end of Expedition 35 and the start of Expedition 36. Hadfield, Marshburn and Flight Engineer Roman Romanenko are scheduled for a 10:31 p.m. landing in southern Kazakhstan, wrapping up 146 days in space for the trio.

› Read more about the station's radiators
› ATCS overview from Boeing