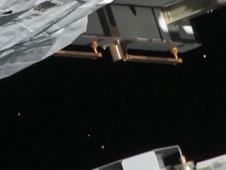 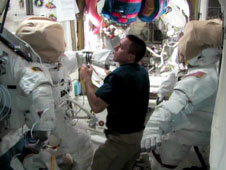 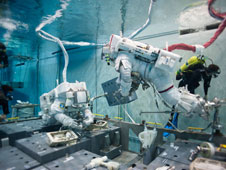 International Space Station managers and the international partners approved plans late Friday for a spacewalk Saturday by Expedition 35 crew members Chris Cassidy and Tom Marshburn out of the Quest airlock of the U.S. segment of the complex to inspect and possibly replace a pump controller box on the station’s far port truss (P6) suspected of leaking ammonia coolant. Final approval to conduct the spacewalk came after a day-long review of procedures and the crew’s preparations to support the excursion.

A leak of ammonia coolant from the area near or at the location of a Pump and Flow Control Subassembly was detected on Thursday, prompting engineers and flight controllers to begin plans to support the spacewalk. The device contains the mechanical systems that drive the cooling functions for the port truss.

The P6 truss was launched to the station as the oldest component of the station’s backbone aboard the shuttle Endeavour on the STS-97 mission in November 2000. It was relocated from its original installation position to the far left side of the station during the STS-120 mission of the shuttle Discovery in October/November 2007.

The spacewalk will be the 168th in support of the assembly and maintenance of the space station and the third for both Cassidy and Marshburn, who conducted two spacewalks together during the STS-127 mission of the shuttle Endeavour to the station in July 2009.

Expedition 35 Commander Chris Hadfield of the Canadian Space Agency will serve as the intravehicular crew member or IV, choreographing the suit up of the spacewalkers and their tasks outside.

NASA TV coverage of the spacewalk Saturday will begin at 7 a.m. EDT. The spacewalk is expected to begin around 8:15 a.m. and should last around 6 1/2 hours. A post-spacewalk briefing will be broadcast on NASA TV no earlier than 4:30 p.m.

› Read more about the station's radiators
› ATCS overview from Boeing