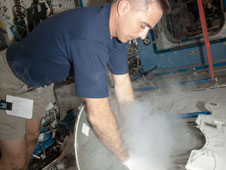 Flight Engineer Chris Cassidy of NASA works with samples at the Minus Eighty-Degree Laboratory Freezer for ISS. Credit: NASA 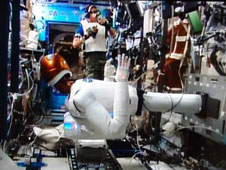 The six-person Expedition 35 crew aboard the International Space Station kicked off the workweek Monday with advanced robotics, an array of science experiments and preparations for an upcoming spacewalk.

Commander Chris Hadfield of the Canadian Space Agency and Flight Engineer Tom Marshburn of NASA began their day with the Reaction experiment, a short reaction time task that allows the crew and researchers to track the effects of fatigue on performance. Afterward, Marshburn collected a blood sample from his fellow NASA astronaut aboard the station, Flight Engineer Chris Cassidy, who then processed the sample and stored it in the Minus Eighty-Degree Laboratory Freezer for ISS, or MELFI, for later analysis back on Earth.

Marshburn spent much of his morning in the Destiny laboratory working with Robonaut 2, the first humanoid robot in space. After setting up Robonaut in the lab, Marshburn donned telerobotics gear that included a special helmet and gloves that allowed him successfully to command the robot by having it copy his movements. This capability will allow the astronauts to make real-time decisions and control Robonaut’s actions from inside the station. Robonaut was designed with the intention of eventually taking over tasks deemed too dangerous or mundane for astronauts, perhaps even venturing outside the complex.

Marshburn also collected data from NanoRacks and transferred the data to a laptop computer. NanoRacks provides microgravity research facilities for small standardized payloads aboard the station.

Commander Hadfield meanwhile collected samples from the potable water dispenser and handed them off to Cassidy who tested them for contaminants using the Total Organic Carbon Analyzer. Afterward, Hadfield checked in on the Binary Colloid Alloy Test, which takes a look at microscopic particles suspended in a liquid and may lead to finding innovative ways to form plastics and improving in manufacturing processes here on Earth. 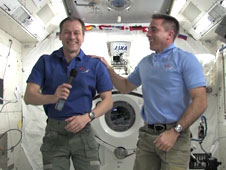 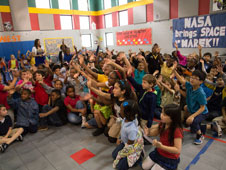 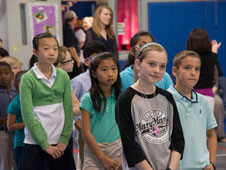 The commander also spent much of his time following a carefully controlled diet and measuring his oxygen uptake as he begins his first day with the Energy experiment, which is aimed at measuring precisely how much food is needed for astronauts during long-duration space missions.

Marshburn and Cassidy took a break in their afternoon to talk with students at Mary Marek Elementary School in Pearland, Texas. The two astronauts answered questions about life, work and scientific research aboard the orbiting laboratory. NASA activities had been incorporated into classes at the school in preparation for the long-distance conversation with the space station crew. Linking students directly to the astronauts aboard the station provides them with an authentic, live experience of space exploration, space study, and the scientific components of space travel and possibilities of life in space.

This in-flight education downlink was one in a series with educational organizations in the United States to improve science, technology, engineering and mathematics teaching and learning. It is an integral component of NASA's Teaching From Space education program, which promotes learning opportunities and builds partnerships with the education community using the unique environment of space and NASA's human spaceflight program.

On the Russian side of the station Flight Engineers Pavel Vinogradov and Roman Romanenko prepared spacewalking tools and recharged the batteries in their Orlan spacesuits in preparation for a spacewalk scheduled for April 19. During their excursion outside the station, the two Russian cosmonauts will deploy and retrieve experiments and replace a retro-reflector navigational aid on the exterior of the Zvezda service module that will be used by the European Space Agency’s unpiloted “Albert Einstein” Automated Transfer Vehicle-4 when it approaches the station for its automated docking in June.

Their fellow cosmonaut on the station, Flight Engineer Alexander Misurkin, spent part of his day working on a thermal loop panel in the Rassvet module. He also set up the Constant experiment, which studies the effect of microgravity on a model enzyme.

Misurkin, along with Vinogradov and Cassidy, also had time set aside for crew orientation to become accustomed to living and working aboard the orbiting complex during their first weeks on orbit. The trio docked to the station aboard their Soyuz TMA-08M spacecraft on March 28 to begin a five month stay aboard the complex.

› Read more about the launch and docking

Over the weekend, a new rocket designed to carry the next spacecraft to join NASA’s commercial resupply fleet was rolled out to its launch pad for a test flight. 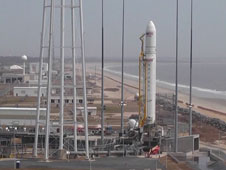 The Antares rocket is rolled out to the Mid-Atlantic Regional Spaceport Pad-0A at NASA's Wallops Flight Facility. Credit: NASA TV

Antares is undergoing testing that will enable the rocket to eventually carry experiments and supplies to the International Space Station aboard a Cygnus cargo spacecraft. This test flight will not launch a Cygnus spacecraft or rendezvous with the space station.

Orbital is testing the Antares rocket under NASA's Commercial Orbital Transportation Services (COTS) program. NASA initiatives like COTS are helping develop a robust U.S. commercial space transportation industry with the goal of achieving safe, reliable and cost-effective transportation to and from the space station and low-Earth orbit.

› Read more about Expedition 35
› Back To Top