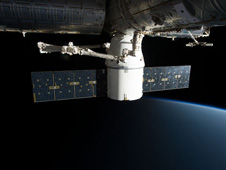 The SpaceX Dragon spacecraft is attached to the International Space Station. Credit: NASA

Science was the main focus aboard the International Space Station while preparations continued for the Dragon spacecraft release, now set for Tuesday, and Thursday’s launch and docking of three new Expedition 35 crew members. After their lunch hour, the current Expedition 35 trio conducted an emergency drill simulating a pressure loss.

More than three weeks after arriving at the station, the SpaceX Dragon spacecraft is ready for the trip back to Earth, now scheduled for Tuesday, March 26. Dragon's return date, originally scheduled for March 25, was postponed due to inclement weather developing near its targeted splashdown site in the Pacific Ocean. The additional day spent attached to the orbiting laboratory will not affect science samples scheduled to return aboard the spacecraft. NASA Television will provide coverage of Dragon's departure beginning at 4 a.m. EDT.

Dragon’s deorbit burn will take place approximately 11:42 a.m. with splashdown scheduled for 12:34 p.m. about 246 miles off the coast of Baja California. Dragon will take about 30 hours to return to port, at which point several critical science samples will be handed over to NASA for a return trip back to Houston that day.

Commander Chris Hadfield worked with the Microgravity Science Glovebox (MSG) for the Coarsening of Solids in Liquid Mixtures experiment. He vented a water line in the MSG and checked the temperature and humidity inside the experiment device.

› Watch an interview with Dr. Jud Ready about his station science experiment
› Read more about Coarsening of Solids in Liquids Mixtures

In advance of Dragon’s departure targeted for Tuesday morning he swapped out research gear inside the EXPRESS Rack 2. A Commercial Generic Bioprocessing Apparatus (CGBA) was removed and replaced inside the rack with the older CGBA to be returned inside the Dragon commercial resupply spacecraft.

› Read more about the CGBA

Hadfield also took part in proficiency training answering questions for a self-assessment test as part of his role as the station’s Crew Medical Officer. He later activated and checked out the functionality of a communications unit to be used from inside the station during Dragon’s release and separation. 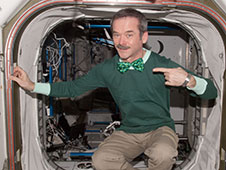 Flight Engineer Tom Marshburn worked on the Gradient Heating Furnace (GHF) in the Kibo laboratory’s Kobairo rack. He installed alloy semiconductor sample cartridges then measured the insulation resistance of the heating units inside the GHF which is used for high quality crystal growth experiments.

› Read more about the GHF

He also participated in the Energy experiment that observes the negative energy balance crew members experience in space and explores exercise as a countermeasure. He then set up the Kubik gear, using the European Drawer Rack‘s laptop located in the Columbus laboratory module, for telemetry downloads. The Kubik incubator/cooler uses seeds, cells, and small animals for life science experiments.

Veteran cosmonaut and flight engineer Roman Romanenko continued his work on an ongoing suite of Russian experiments. He copied data recorded for the Identification experiment which records the physical stress on the space station during dynamic events such as reboosts, spacecraft dockings and spacewalk. He also continued his photography for the Uragan and Ekon Earth observation studies.