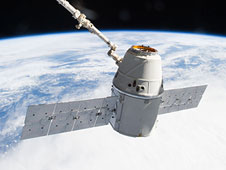 The SpaceX Dragon commercial cargo capsule is pictured March 3rd shortly after its capture by the Canadarm2. The station’s robotic arm will also release it this Monday for splashdown in the Pacific Ocean. Credit: NASA

The three Expedition 35 crew members aboard the International Space Station continued their focus on materials and fluids physics science this week. The trio also busied themselves with routine station maintenance and prepared for the departure of the SpaceX Dragon spacecraft and the arrival three new crew members next week.

The multinational station mission management team met today to review plans and preparations for Dragon’s departure and return to Earth, and gave a unanimous “go” for Monday’s release.

Hadfield removed and replaced a sample processing unit from the CSLM experiment and transferred data collected from the gear. CSLM researchers hope to develop more efficient and economical means of producing higher quality products derived from the casting of molten metals.

The Canadian commander also took photographs of experiment gear and samples taken during Thursday morning’s run of the BCAT study. BCAT observes microscopic particles suspended in liquids, or colloids, to learn how to develop smarter, more advanced materials on Earth.

Flight Engineer Tom Marshburn has spent all week working on the Marangoni Inside experiment which observes surface tension produced by temperature differences occurring at a liquid/gas interface. He worked in the Fluid Physics Experiment Facility, where the experiment takes place, checking imagery gear and hose and cable connections.

Marshburn also worked on a botany experiment, Seedling Growth, studying how plants grow in space in response to light and microgravity. The plants aren’t grown in potted soil but in experiment containers inside the European Modular Cultivation System maintained by the crew and monitored by ground controllers.

Hadfield and Marshburn also partnered up to pack up gear returning to Earth inside the SpaceX Dragon commercial cargo capsule on Monday. NASA TV coverage of the release will begin at 5 a.m. EDT and end after Dragon leaves the vicinity of the space station. SpaceX will then provide updates to its website of reentry and splashdown activities.

› Read more about the SpaceX-2 mission

Ground controllers will send commands to the Canadarm2 to unberth the SpaceX Dragon commercial cargo craft at 6 a.m. for a release at 7:49 a.m. Dragon will fire its engines for the last time at 12:33 p.m. sending it through the Earth’s atmosphere for a splashdown in the Pacific Ocean around 1:35 p.m.

Flight Engineer Roman Romanenko worked during his morning in the station’s Russian segment replacing a Rodnik water tank valve. He also performed some preventive maintenance on the Zvezda service module’s ventilation system. At the end of his day, the veteran station resident and cosmonaut conducted ongoing Earth observation photography for the Uragan and Ekon studies.

Wednesday night, the station performed a reboost using the ISS Progress 49 thrusters. The reboost raised the station’s altitude about 3 miles to prepare for the launch of the Soyuz TMA-08M spacecraft carrying Flight Engineers Pavel Vinogradov, Chris Cassidy and Alexander Misurkin to dock to the Poisk module next week.
› Back To Top