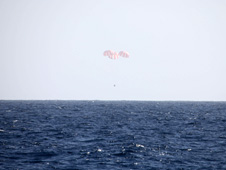 The SpaceX Dragon spacecraft just prior to splashdown in the Pacific Ocean. Credit: SpaceX

The SpaceX Dragon fired its engines for the last time Tuesday at 11:42 a.m. EDT sending it through the Earth’s atmosphere for a splashdown in the Pacific Ocean at 12:34 p.m. A team of SpaceX engineers, technicians and divers will recover the vehicle and its scientific cargo off the coast of Baja, California, for the journey back to shore which will take about 30 hours.

Dragon's release from Canadarm2 occurred at 6:56 a.m. The Expedition 35 crew commanded the spacecraft to slowly depart from the International Space Station. Ground controllers earlier sent commands to the Canadarm2 to unberth Dragon from the Harmony node at 4:10 a.m.

Dragon's return date, originally scheduled for March 25, was postponed due to inclement weather developing near its targeted splashdown site in the Pacific Ocean. The additional day spent attached to the orbiting laboratory will not affect science samples scheduled to return aboard the spacecraft. NASA Television will provide coverage of Dragon's departure beginning at 4 a.m. EDT.

The Dragon spacecraft launched atop the Falcon 9 rocket on the SpaceX-2 commercial resupply mission March 1 from Cape Canaveral Air Force Station in Florida. Two days later Flight Engineer Tom Marshburn captured the Dragon just 32 feet away from the station with the Canadarm2. Ground controllers then took over Canadarm2 operations and berthed Dragon to the Harmony node.

Hatches to the commercial cargo craft were opened about four hours later beginning three weeks of cargo transfer activities. Station crew members swapped 1,200 pounds of cargo delivered to the station with 2,600 pounds of gear to be returned to Earth.

› Read about the research gear delivered aboard Dragon 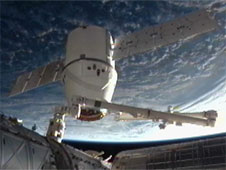 The SpaceX Dragon is unberthed from the station's Harmony node as the sun begins to rise over the Earth. Credit: NASA

Experiment gear and space hardware were delivered for NASA and its Russian, Canadian, European and Japanese space station partners. Over twice as much gear was returned including trash, station hardware and biological samples collected and stored in freezers during the course of research for analysis on the ground.

Dragon is the only space station resupply spacecraft able to return a significant amount of cargo to Earth. It returned about 2,668 pounds (1,210 kilograms) of science samples, equipment and education activities.

Investigations included among the returned cargo could aid in food production during future long-duration space missions and enhance crop production on Earth. Others could help in the development of more efficient solar cells, detergents and semiconductor-based electronics.

Among the returned investigations was the Coarsening in Solid-Liquid Mixtures (CSLM-3) experiment, which also launched to space aboard this Dragon. CLSM-3 studies how crystals known as dendrites form as a metal alloy becomes solid. The research could help engineers develop stronger materials for use in automobile, aircraft and spacecraft parts.

Dragon’s rendezvous with the station was delayed by a day after three of four thrusters did not fire as commanded. SpaceX engineers resolved the problem and continued Dragon’s mission to the station after consultation with NASA managers.

A third SpaceX commercial resupply services mission is targeted for launch at the end of September.

Dragon originally performed two demonstration flights, the first in December 2010 for just two orbits and the second in May 2012. The second Dragon demonstration mission actually arrived at the space station, delivered non-essential cargo and stayed for six days after three days of approach and rendezvous tests. Its first official resupply mission under NASA’s Commercial Resupply Services contract was in October 2012 during Expedition 33 and lasted three weeks.