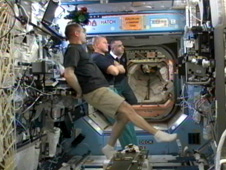 Three new crew members are on their way to join their Expedition 34 crewmates aboard the International Space Station. They launched aboard the Soyuz TMA-07M spacecraft at 7:12 a.m. EST (6:12 p.m. Baikonur time) Wednesday from the Baikonur Cosmodrome, Kazakhstan.

Flight Engineers Tom Marshburn, Roman Romanenko and Chris Hadfield will orbit the Earth for two days before docking to the Rassvet module at 9:12 a.m. Friday. The new trio will join Commander Kevin Ford and Flight Engineers Oleg Novitskiy and Evgeny Tarelkin who’ve been residing at the orbital laboratory since Oct. 26.

Aboard the station Wednesday, Ford, Novitskiy and Tarelkin focused on cargo transfers and science experiments and had a chance to watch the launch of their crewmates via a live video uplink.

Ford performed some maintenance on the Combined Operational Load Bearing External Resistance Treadmill (COLBERT) in the Tranquility node. He also worked on the Microgravity Experiment Research Locker/Incubator (MERLIN) and transferred cargo from the Permanent Multipurpose Module. 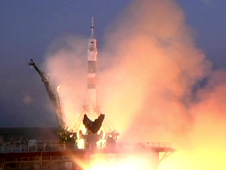 Tarelkin continued packing the ISS Progress 48 cargo craft with trash and other unneeded items and worked with the Vizir experiment, which is a Russian Earth observation investigation.

Novitskiy and Tarelkin also worked with the Lower Body Negative Pressure experiment. This is a pair of trousers the crew puts on that lowers the pressure on the legs, pulling blood down from the upper body and simulating what the crew will feel when they return to Earth and feel gravity again.

The station’s residents also had opportunities for Earth observation and photography as they orbited the world every 90 minutes. Wednesday’s orbital path provided chances for the crew to photograph the Tungurahua Volcano in Ecuador (which has had several explosions in the last few days and has ash shooting more than 5 miles into the air); the Irrawaddy River in Burma; Delhi, India; and, Panama City, Panama. Over half a million photos of our planet taken from aboard the station are available online at the Gateway to Astronaut Photography of Earth.

› Send a holiday postcard to the station crew