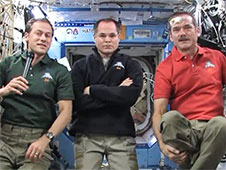 The docked ISS Progress 49 cargo craft fired its engines at 5:34 a.m. EST Friday raising the International Space Station’s orbit. The reboost readies the Soyuz TMA-06M spacecraft for its undocking on March 15 and the arrival of the Soyuz TMA-08M vehicle on March 28.

Ford replaced a water recycle tank in a Water Recovery System rack that is part of the station’s environmental control and life support system. He later participated in an ultrasound eye exam with Marshburn.

Marshburn later took part in the Reversible Figures experiment which investigates a crew member’s perception and orientation in space. After that he continued prepacking gear to be stowed and returned aboard the SpaceX Dragon commercial cargo capsule after its arrival in March.

Hadfield transferred urine to a recycle tank in the Tranquility node. He also set up a camera to photograph crystals for the Binary Colloidal Alloy Test experiment. Hadfield later worked with the Reversible Figures experiment and inspected and cleaned the Microgravity Science Glovebox.

In the Russian segment of the station, a trio of cosmonauts continued ongoing maintenance and international science.

The cosmonauts also conducted numerous science experiments and Earth observation studies. Relaxation is a long-running experiment that observes the effects of jet exhaust or the plasma created by objects entering Earth’s atmosphere. For the Uragan study photography is used to document and predict the effects of natural and man-made disasters on Earth.