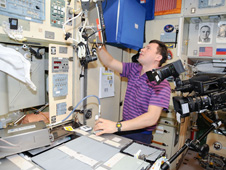 The six-member Expedition 34 crew is back at work following Tuesday morning’s temporary loss of communication. The crew was safe the entire time and was able to contact Mission Control while orbiting over Russian ground stations. The communications link, which was lost after controllers switched to a backup computer during a software update, was fully restored after nearly three hours.

Ford began the final run of the InSPACE-3 experiment for Expedition 34. He powered up the hardware and set up the Microgravity Science Glovebox for downlinking the science activities to payload specialists on the ground. The commander then continued preparations for the arrival of the SpaceX-2 Dragon commercial cargo capsule in early March.

Marshburn removed and replaced a water separator in the Destiny laboratory during his morning. That work required deactivating the Common Cabin Air Assembly and rotating out a rack to access the water separator. He also joined Ford in practicing on a computer for the rendezvous and capture of the Dragon capsule.

In the Russian segment of the station, cosmonauts Oleg Novitskiy, Evgeny Tarelkin and Roman Romanenko continued an array of science and maintenance tasks.

Novitskiy loaded items for disposal in the ISS Progress 49 resupply craft. He then joined Tarelkin for a ground conference to discuss cargo to be returned aboard the Soyuz TMA-06M spacecraft.