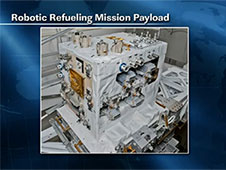 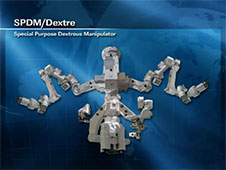 Dextre, which is attached to Canadarm2, performs the fine-tuned robotics work on the Robotic Refueling Mission. Credit: NASA

Robotics engineering teams had discovered an intermittent anomaly in the software that controls Canadarm2, which could potentially have caused the system to use the wrong parameters while in motion, a particular concern when the arm must work close to other structures (as is the case with RRM). After detailed analysis, CSA identified steps that can be taken to ensure Canadarm2’s software selects the right parameters, thereby ensuring it is safe to proceed.

The Canadian-build Canadarm2 and the Special Purpose Dexterous Manipulator, the International Space Station’s robotic handyman known as Dextre, will resume Day 2 operations of RRM Thursday. Because Dextre successfully stowed the tertiary cap in the RRM module on Tuesday, the robot’s next step will be to cut two sets of wires on the safety cap. The goal of RRM is to demonstrate how robots could service and refuel satellites to extend their useful lifetime.

Flight controllers are also getting ready to fire the engines of the docked ISS Progress 49 resupply craft Wednesday evening. The engine firing will raise the station’s perigee by one mile in preparation for next month’s arrival of the ISS Progress 50 cargo craft. The new Progress vehicle will launch and dock to the station on the same day after four orbits on Feb. 11.

Back inside the station, all systems are operating normally and the six-member Expedition 34 crew is working on regularly scheduled science, maintenance and exercise. The crew also got together Wednesday afternoon for a simulated emergency drill to practice roles, responsibilities, communication and coordination.

Commander Kevin Ford started the morning installing background noise sensor kits in the Destiny laboratory. He also worked throughout the day on science hardware and reviewed a science experiment. He finally closed the U.S. window shutters before the docked Progress 49 fires its engines to raise the station’s orbit.

Canadian astronaut and Flight Engineer Chris Hadfield spent all morning and the early afternoon routing Ethernet and video cables for a new high-rate communications system in the Destiny lab. He then continued setting up a new experiment, ISERV, which is expected to provide useful images for use in disaster monitoring and assessment and environmental decision making.

Flight Engineer Tom Marshburn assisted Hadfield with the cable routing throughout the morning. He also worked throughout the day sampling water and air inside the station for microbes.

Flight Engineers and cosmonauts Oleg Novitskiy and Evgeny Tarelkin collected blood samples and stored them in a science freezer for the Immuno experiment. That study seeks to understand stress and immune response during long-duration microgravity missions and how to counteract their side-effects.