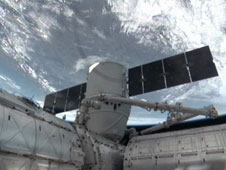 The International Space Station welcomed its second contracted cargo delivery flight Sunday with the arrival of the SpaceX Dragon carrying a treasure trove of science cargo, hardware and supplies for the Expedition 34 crew.

Controlling the 57.7-foot Canadarm2 from a robotics workstation inside the station’s cupola, Commander Kevin Ford, with assistance from Flight Engineer Tom Marshburn, grappled the SpaceX Dragon cargo craft at 5:31 a.m. EST as it flew within about 32 feet of the complex. Flight Engineer Chris Hadfield joined Ford and Marshburn in the cupola to assist with the capture and help coordinate the activities. The station was flying 253 statute miles above northern Ukraine at the time of capture.

Upon successful completion of the grapple, Ford congratulated SpaceX and the ground teams supporting the mission and remarked, “As they say, it’s not where you start, but where you finish that counts, and you guys really finished this one on the mark. You’re aboard, and we’ve got lots of science on there to bring aboard and get done."

With Dragon securely in the grasp of Canadarm2, the robotics officer at Mission Control remotely operated the arm to install the capsule to its port on the Earth-facing side of the Harmony module. Once Dragon was in place, Ford monitored the Common Berthing Mechanism operations for first and second stage capture of the cargo ship, assuring that the vehicle was securely attached to the station with a tight seal. Second stage capture was completed at 8:56 a.m.

Running well ahead of the timeline, Marshburn opened the hatch to Dragon at 1:14 p.m., enabling Ford and Hadfield to enter the cargo craft a little more than four hours after Dragon was berthed to the station following a flawless rendezvous. Ford and Hadfield will begin to unload Dragon’s cargo on Monday morning. 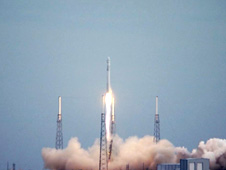 The SpaceX Falcon 9 rocket, with its Dragon spacecraft onboard, lifts off from Launch Complex 40 at the Cape Canaveral Air Force Station in Florida. Image credit: NASA TV

Dragon is scheduled to spend more than three weeks attached to the station. During that time, the crew will unload around 1,200 pounds of science cargo, station hardware and crew supplies from the craft and reload it with more than 2,600 pounds of experiment samples and equipment for return to Earth.

After Dragon’s mission at the station is completed, the crew will use Canadarm2 to detach Dragon from Harmony on March 25 and release it for a parachute-assisted splashdown in the Pacific Ocean about 300 miles west of the coast of Baja California.

Dragon launched atop a Falcon 9 rocket at 10:10 a.m. Friday from Cape Canaveral Air Force Station in Florida, beginning the second of 12 SpaceX flights contracted by NASA to resupply the station. This marks the third visit by a Dragon capsule to the orbiting laboratory, following a demonstration flight in May 2012 and its first commercial resupply mission in October 2012.

Dragon’s rendezvous with the station was delayed a day in the wake of a temporary loss of three of four banks of thrusters after Dragon separated from the Falcon 9 rocket Friday.

› Read more about SpaceX 2
› Back To Top