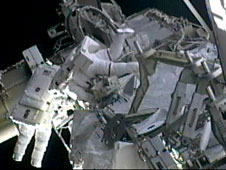 During the spacewalk which began at 8:29 a.m., Williams and Hoshide ventured out to the port side of the International Space Station’s truss to configure the 2B solar array power channel’s photovoltaic thermal control system (PVTCS) to support ground-based troubleshooting of an ammonia leak.

The spacewalking duo isolated the photovoltaic radiator on the P6 truss from the PVTCS, shutting off the flow of ammonia in and out of it and rerouting the ammonia flow through a spare radiator so the PVTCS can continue operation. Over the following weeks and months, flight controllers at Mission Control Houston will monitor telemetry to see if the leak continues.

If rerouting the ammonia through the spare radiator stops the leak, mission managers will evaluate whether to leave the fix as-is or replace the photovoltaic radiator on a future spacewalk. If the leak continues, additional troubleshooting will be required.

This was the 166th spacewalk in support of station assembly, totaling 1,049 hours and 1 minute -- the equivalent of 44 days.
› Back To Top